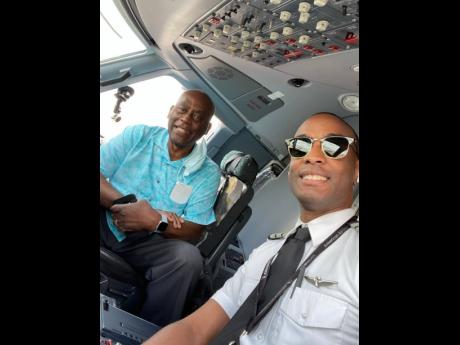 Contributed
American Eagle Captain Anselm Dewar and his dad Ashman in the cockpit on a recent flight between Florida and South Carolina, United States. 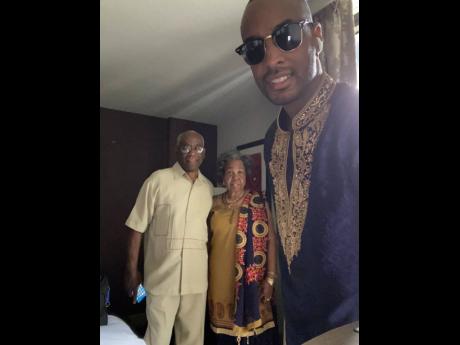 Anselm Dewar was never an emotional child, and neither is he as an adult.

Yet he was moved to tears recently, crying like any son would while recognising his dad, Ashman Dewar, during their first commercial flight together.

The 34-year-old captain at American Eagle – American Airlines’ regional carrier – was bubbling with emotions earlier this month during a flight between Miami, Florida, and Charleston, South Carolina, while announcing that his Jamaican dad – a man who stood by him and supported his career decision – was on-board the aircraft.

“When it came time and I started saying thank you to my father and saying this is my first flight with him, the emotions just came outa nowhere and I just chokewd up; the tears welling up in my eyes and I didn’t care; it was my father, it was love. It was all love,” young Dewar explained to The Sunday Gleaner, which tracked him down after the ‘Fatherly Love’ event went viral on social media.

The elder Dewar, originally from the Mannings Hill/Stony Hill area in St Andrew, who shuns the limelight, quipped when the newspaper spoke with him at his home in Georgia, United States, that he thought the announcement was going to be made from the cockpit, and not in the open, so when he realised what was happening, “I just ducked my head”.

Generally a shy person, the older Dewar admitted there was nothing he could do about it, but any idea of feeling ‘cute’ was melted by the pride he felt watching his son handling a machine in the air.

“He has been at it for a long time. Over 10 years he’s been flying. I always wanted to fly with him and he always want me to come with him, but he’s always somewhere else and the opportunity never did arise, so you know, this time we could make it happen,” the proud father shared.

In fact, the older Dewar, a cartographer by profession, said before his son became a pilot, he was extremely fearful of flying. So scared was he that every time he had to go somewhere on a plane, once the aircraft took off, he told himself that was his last flight, “but ever since he started in this aviation thing, I have been reading up about airplanes and airplane disasters and when I see the training that he had to go through, it built my confidence. When I see how the planes are ... . It’s pretty safe to fly.”

The older Dewar said his son always pushed the limits, but he and his wife Alverine, as Jamaican parents, made sure to keep him in bounds; however, the one child they share was not any more rambunctious than he himself growing up.

“He always knew what he wanted to be or what he wanted to do and he had a determination. Even getting into flying. It took a great deal to reach the point where he is today. After getting his licence, it was a hard struggle to get further. You know, you have to build up your flying hours, take different ratings, different qualifications for flying different types of planes and all that, so it was hard work.”

The Dewars, although having migrated from Jamaica years ago, never once discarded the island’s rich culture, which young Anselm sapped up like a sponge. The American Eagle captain speaks fluent Patois, is in sync with his heritage, and is more Jamaican than those born on the island, says his father.

Anselm is also a lover ska and rocksteady, which he heard his father playing during his childhood days, and tells The Sunday Gleaner the legacy he has inherited keeps him in touch with all that’s Jamaican.

Reminiscing, young Dewar said when he lived in New Jersey, where he was born, his community was predominantly white. He was one of six black people in his school of approximately 1,200 pupils, but the Jamaican culture was so embedded in his family, when he worked as a server in a restaurant, he had to try to convince the customers he was born in the USA.

“I would always end up saying, ‘Well, my parents are from Jamaica’. So it’s always been kinda funny and I’ve kind of had an identity crisis growing up ‘cause it’s just like I was born in New Jersey and my family are Jamaican,” he said.

Anselm won’t spend Father’s Day with his father, owing to the distance between them, but the elder Dewar could not have got a better gift of flying with his son.

Giving a shout out to the captain and his father, American Airlines’ vice-president of flight operations at Envoy, Captain Ric Wilson, said every day the airline enjoys inspiring moments like these.

“Anselm is an enthusiastic, passionate pilot with a lifelong dream of flying. I’m happy he got to share some of that dream with his father,” he said.