Concern over cops cosying up with ‘bad boys’ 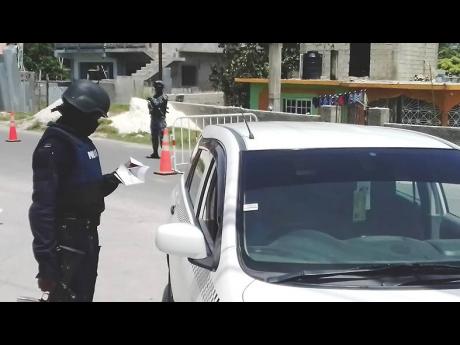 Photo by Hopeton Bucknor
A policeman checks the documents of a motorist in Norwood, St James, on Sunday. Opposition Leader Mark Golding has raised concerns about the rotation of law-enforcement personnel in Mt Salem, which could compromise ZOSO security arrangements.

Opposition Leader Mark Golding is calling for increased rotation of the security forces assigned to the zone of special operations (ZOSO) in Mt Salem, St James, amid complaints by some residents that familiarity is reducing their effectiveness.

Golding, who toured the community last Friday as part of a high-profile People’s National Party (PNP) delegation, said it would appear that some members of the police force are forging inappropriate relationships that are stymieing efforts to weed out criminal elements.

That note of caution will likely be reinforced in Norwood, another crime hotspot in St James, which was declared a ZOSO on Sunday in a bid to staunch a wave of murders. It also emphasises the constabulary’s difficulty with unshackling itself from its notoriety for corruption and officers who operate as double-crossers.

There are three other ZOSOs - Denham Town and Greenwich Town in Kingston, and August Town, St Andrew.

Golding warned that failing to refresh security personnel regularly could undermine the effectiveness and impartiality of the police on the ground.

Last year, The Gleaner received anecdotal reports of soldiers and police engaging in romantic partnerships with women in communities placed under states of emergency.

“They get too familiar with the boys and girls in the community and that affects the way in which they operate, their objectivity, and the persons who they are prepared to deal or not deal with and how they enforced the law, and so on,” said Golding.

“And, I think that stands to reason that the police, who are generally the youngest individuals being stationed in one place for extended periods of time, will develop all sorts of relationships on the ground. Therefore, a more frequent rotation would be a good idea,” added Golding.

Shootings in St James have fallen eight per cent, from 59 to 54, year-on-year up to June 18, but use of the gun has been far deadlier. St James (61 per cent) and Hanover (62 per cent) account for the highest increase in murders in Jamaica’s 19 police divisions, but St James’ 79 killings are almost four times Hanover’s aggregate.

In September 2017, a section of the Mt Salem community became the country’s first ZOSO, under the Law Reform Zones of Special Operations Specials Security and Community Development Measures Act of 2017. The crime-fighting has remained in place ever since.

The opposition leader also questioned the strategy being employed in policing the ongoing ZOSOs.

“The security forces tend to be stationed at the entrance of the lanes but a lot of what happens, in terms of the murders, are taking place down inside the lanes towards the back, where different lanes converge at the back, and therefore easy access and easy departure for the various wrongdoers,” he said.

Golding, who is also president of the PNP, also questioned the effectiveness of the police and soldiers in reducing fear among the residents.

Sandra Blair, a resident of Piggott Street, which falls within the perimeter of the Mt Salem ZOSO, said that she continues to live in fear four years into the security operation.

“Right now we under ZOSO and me still scare for my life with the police them, because nuff of them and the bad boy them a friend,” said Blair.