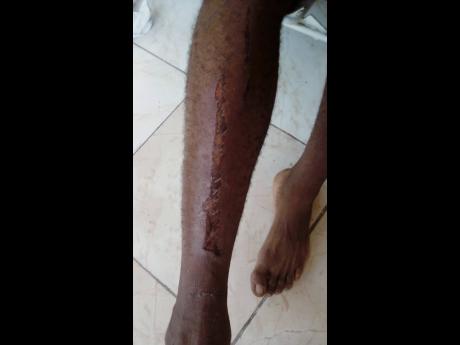 Photo by Ruddy Mathison
The 38-year-old taxi operator shows bruises he said he sustained during his ordeal.

A 38-year-old taxi operator who endured two days of threats and was reportedly taunted by mobsters at shallow graves with worm-infested human remains has been freed after his family paid a $400,000 ransom.

Now he is living in fear that they will return.

The cabbie, whose name this newspaper has withheld because of security concerns, was released on Friday by men who allegedly kidnapped him at a garage in Spanish Town.

While abductions are rife in Jamaica, few such attacks come with a demand for ransom. Several persons making such bids have been arrested in the past.

The ransom was paid by his girlfriend. The kidnappers at one point toyed with a figure of $800,000, The Gleaner understands.

It is unclear whether the police were aware of the drop-off.

The cabbie, who had bruises all over his body from the ordeal, declined to give details of how the money was passed to his abductors but expressed joy at being reunited with his family. He said that he still hears the voices of his abductors in his head.

Recounting his ordeal, the taxi operator said he had stopped at a garage on Job Lane in Spanish Town on Wednesday, June 16, about 9:30 a.m., to have repairs done to his car. Suddenly, he was pounced upon by four men.

“Because of my tae kwon do training, I was able to put one to the ground, but the others rushed me. I fought back, and one hit me on the head with his pistol and say, 'The don say him want him'. They were able to subdue me and forced me into the car,” he told The Gleaner.

The taxi man said he was taken to a location in Spanish Town where he was gagged, his hands and feet bound, and was told by the attackers that they wanted money for his release.

The man said he managed to escape on Wednesday evening and ran towards Ensom City but was chased by the men and recaptured.

“Friday, dem nearly kill me because dem sey dem read about it in the newspaper, but the one who was the don come and say, 'Like how dem aware of it now, if we kill him, a murder that. A wickeder charge than kidnapping. It better we get lock up for kidnapping than murder',” he said of a June 18 Observer report.

Senior Superintendent Anthony McLaughlin, head of the Counter-Terrorism and Organised Crime Investigative Branch, told The Gleaner that the incident forms part of an active investigation and that his department could not comment on the matter.

The 38-year-old taxi operator said that he was taken to an open field, where he was reportedly shown a number of shallow graves with human remains swarming with flies.

“Mi see more than 10 graves. One of dem even use a piece of stick to scrape weh some dirt, and mi coulda see the head of the person. Mi nuh know if the police dem gone to investigate yet, but mi see the grave dem,” he said.

The cabbie said that his kidnappers appeared to be in their early 20s, with the one dubbed 'the don' in his 30s. He believes that the assailants had done surveillance on his movements and know where he lives.

When the ransom was paid on Friday, the attackers drove nearby his house and pushed him out of the car, the taxi operator told The Gleaner.

“Right now, I am a target. My whole family is traumatised. I can walk out there and mi hear 'Pow!' Mi have no protection for myself and my family.

“... How am I going to protect my family? I am living in fear right now, and these men can return any time to kill me and my family.”