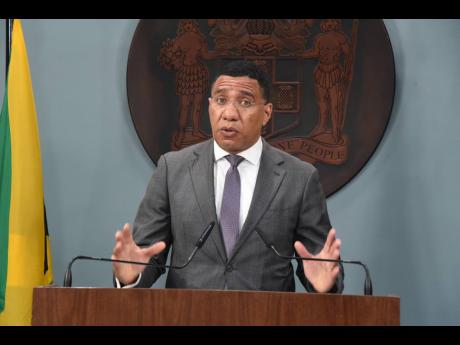 JIS
Prime Minister Andrew Holness has been under pressure to reopen the entertainment industry.

Prime Minister Andrew Holness will this afternoon declare in Parliament how his administration will chart a path for the reopening of Jamaica’s multibillion-dollar entertainment sector, which has been gutted by job losses because of a COVID-19 ban.

As he weighs the balance of economic displacement and the health threat of the superspreader virus, major and small-scale entertainment interests are calling for a level playing field.

Ibrahim ‘IB’ Konteh, an impresario for high-profile brands like Strickly2K, has warned the authorities to navigate the resurrection of entertainment with an even hand in order to build national consensus.

Jamaica’s entertainment industry is culturally diverse, but its economic base in small rural townships and inner cities has an outsize influence on low-income livelihoods.

“Even though they may not have the biggest event, their events are more frequent. The weekly dances, round robins, bar parties, and so forth,” Konteh told The Gleaner.

“I am hoping it is inclusive, because thus far, it has been hard to get information.”

That perceived vacuum has stoked anger and fatigue among entertainment stakeholders who have been pressed by state authorities to hold strain amid 15 months of see-saw infections. Sector interests are optimistic about pledges to waive municipal fees but have argued for state-sponsored payouts to insulate them during the financial fallout.

Konteh charged that there has not been sufficient consultation with entertainment players, a situation Local Government Minister Desmond McKenzie has blamed on the sector’s scattered lobbies.

Konteh is lobbying for a simplification of permit application processes which event-planning professionals have described as burdensome and complicated.

“You have to go to five or six different places to apply for an event. Fire department, ODPEM, KSAMC, JAMMS, and so forth,” said Konteh, referring to the Office of Disaster Preparedness and Emergency Management, Kingston and St Andrew Muncipal Corporation, and the Jamaica Music Society.

“This is an opportunity for us to digitise or centralise the way in which we can apply for permit as an easier process.”

Round-robin czar organiser Kelly Upsetter is also watching the developments keenly, fearful that marginal players will be left behind.

“They are going to have one whole heap of law that they gonna implement.

“You will have to have licence and, by time you are done to get all those things, it nuh make no sense for the little round-robin man weh a keep a party,” she told The Gleaner.

Videographer Maurice Robinson of Mali Videos said that he has had to pivot to stay afloat amid collapsing revenues.

On the heels of his son getting accepted to aviation school in Miami, Robinson said he is hoping to benefit from the new provisions. He is facing mountainous tuition fees of US$50,000.

“From COVID we nuh really get no event. It’s just funeral and function. A lot of light things were being shot. I did graphics, and some minor things, built signs because it affect me bad,” Robinson said.

Liquor consumption took a massive hit because of the party lockdown. Chadwyke Chin Sue, of Wholesale184, understands the crisis too well.

The impending softening of measures has implications beyond the benefit to the core major stakeholders, with jobs for unskilled labour a key index of the multiplier effect of the party economy.

“It affects other people employment. The regular man who have to lift the crate dem, collect the bottle dem, it’s a whole heap we can talk about. Is almost like you took away the air the human body need,” Chin Sue said.

Despite the mounting pressure on the Holness administration, medical doctors are wary of rushing to reopen entertainment with Jamaica fully vaccinating less than three per cent of its population.

Medical Association of Jamaica President Dr Andrew Manning has warned that a third wave could reverse the gains since the tightened weekend curfews of March 2021.

Reopening entertainment venues would require strict logistical arrangements for security and health. However, police and soldiers have been involved in a cat-and-mouse game with rogue partygoers, rounding up hundreds who often flout mask-wearing and social-distancing laws.

“If the positivity rate goes up too high, we are gonna reach the situation again where we don’t have bed space to deal with the surge and we would reach a point at which we potentially run out of oxygen,” Manning told The Gleaner on Monday.

There is no settled value on Jamaica’s entertainment sector, but Portfolio Minister Olivia Grange’s estimate of a $100-million loss in the first three weeks after COVID hit the island’s shores is a barometer of the multibillion-dollar catastrophe.