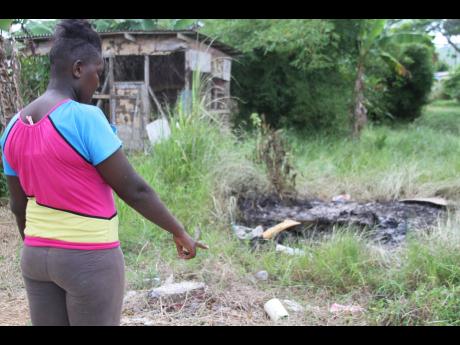 Nathaniel Stewart/Photographer
Melissa Mason looks at an an area where the blood-stained mattress, pillows and sheets were burnt yesterday after her friend Tashika McKay was allegedly killed by her boyfriend in Rhoden Hall, Kellits, Clarendon, on Sunday. 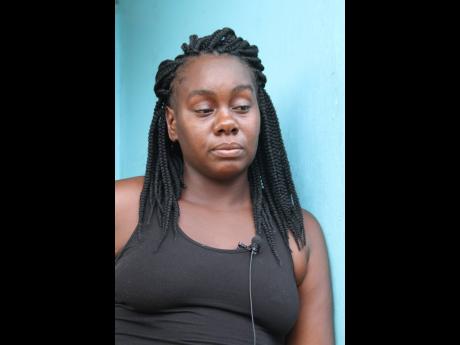 Nathaniel Stewart/Photographer
Kerona McKay, aunt of Tashika McKay, reflects on the life of her niece and her shocking murder on Sunday.
1
2

The mother of a 20-year-old man, who was rescued by cops from an angry mob accusing him of killing his 21-year-old pregnant girlfriend on Sunday, is accusing the police of killing her son while in lock-up less than 24 hours later.

She is blaming the officers of the Lionel Town Police Station for her son Markland ‘CJ’ Hayles’ death, accusing them of covering up their deed by labelling it a suicide.

Residents of Rhoden Hall in Kellits, Clarendon, however, see Hayles’ demise as some sort of justice after he allegedly killed Tashika McKay on Sunday, reportedly after accusing her of being unfaithful to him. Irate residents pelted the accused with stones as the officers removed him from the house and the injured Hayles was taken for treatment at hospital. One officer was also reportedly injured.

Hayles was later taken to the May Pen Criminal Investigation Branch, where he confessed to the crime during a caution statement, the police said, before being taken to the Lionel Town Police Station, where he was placed in a quarantine cell by himself in line with COVID-19 protocols.

In a twist of events, the police report that about mid-morning yesterday, Hayles was found hanging with a piece of clothing tied around his neck. He was assisted to hospital, where he was pronounced dead.

“No one can tell me say a nuh the police kill him ‘cause them hide it (his death),” she said yesterday. “When we reach at the police station, a gentleman was around the desk and we ask if we could see Markland Hayles. He said to us that we have to wait, so we sit and wait. After we wait half an hour, we ask him what is going on. Him say we must wait.”

Bailey said she watched for some time as police personnel moved in and out of the cell where her son was being held, but no information was given to her.

“When we were there, we see a van drive in and we started to look because them go in the cell. The gentleman that told us to wait went in the cell two times. Then after, two more police went into the cell. A next policeman came into the station then went out with a cutlass,” she said.

Bailey recounted that she then saw a person being put into the service vehicle, whom she identified as her son by the shorts he was wearing.

“Them did want to put him behind the driver’s seat, but him couldn’t hold cause it seem like him stiff. When him aunty look in a the van, a CJ that in a the same shorts weh him did inna,” she said.

The family of the deceased pregnant woman believes that Hayles’ death is an indication of justice being served.

Her aunt, Kerona McKay, was a picture of grief when she spoke with The Gleaner.

She said it was McKay’s four-year-old daughter who called her to check on her mother as she was not responding to her calls.

“Her daughter come and say I must come here let she show me something. ‘Me a call me mother and she nah answer and when me look pan har, hair creme in har hair and pan har face’,” she said, adding that the hair creme the child referred to was curdled blood.

Kerona, who lives in the same yard, said she was greeted by a horrific scene when she entered her niece’s house to find her face down in a pool of blood. She said she began wailing, adding that she initially assumed her niece, who was eight months pregnant, had died from birth-related complications.

Melissa Mason could not fathom that Saturday night was the last time she would see her friend alive.

“Me cyaa believe say Tashika nuh live fe have her baby,” Mason said, adding that she was alerted by screams and was told to check on McKay and stumbled upon the bloody scene.

The bloodied mattresses, sheets and pillows – reminders of McKay’s brutal death – were burnt in the yard early Monday morning.

While residents in the rural community were saddened by the death of the young mother and her unborn child, there was no empathy for the alleged killer.

“From him dead back, everything good. Everything under control,” said one resident.

The Independent Commission of Investigations confirmed to The Gleaner that it was probing Hayles’ death.