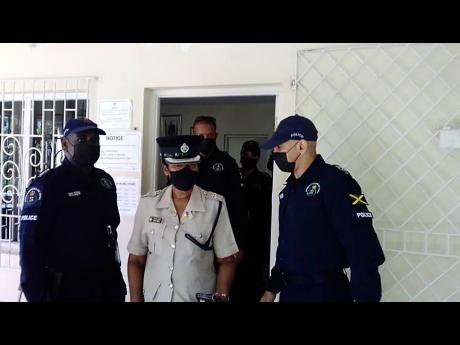 Photo by Hopeton Bucknor
Superintendent Sharon Beeput (centre), commander of the Hanover Police Division, talks with Commissioner of Police Antony Anderson (right) at a former Electoral Office of Jamaica site that is to be repurposed as a police post in Hopewell.

Commissioner of Police Antony Anderson has approved the site for the erection of a police post in the Hopewell township, which has emerged as a criminal hotspot in Hanover.

The building, which was initially identified by Superintendent Sharon Beeput and subsequently approved by the Hanover Municipal Corporation, formerly housed the Electoral Office of Jamaica site for Hanover Eastern.

“We are still negotiating it, and the divisional commander has invited us to have a look at it to see if it is suitable to accommodate a police post,” said Anderson, after a brief inspection of the building.

“This is my first time looking at it, and I have given her the opportunity to explore the possibility of having something here at Hopewell.”

The commissioner said the building appeared to be in good order and was at an ideal location to effectively serve the community.

In recent years, Hopewell has been rattled by a number of murders and has increasingly been viewed as a haven for gangsters fleeing justice in neighbouring communities.

“We believe Hopewell needs round-the-clock security based on some of the criminal activities that have been taking place in this township,” Beeput told The Gleaner when she first undertook an acquisition bid.

“If we have a small team of officers on call in this community, I strongly believe we will be better able to put pressure on the criminals who are occupying this space.”

Hanover has recorded 24 murders since the start of the year. Hopewell has accounted for four.

The top cop's endorsement of the proposed police post has been welcomed by residents of Hopewell, who are hopeful that the process will be expedited.

“This community is a very vital area and can be considered one of the main economic centres in Eastern Hanover,” one businessman, who requested anonymity, told The Gleaner.

“We have been seeing too much crimes being committed in the Hopewell Square area, and the police in Lucea and Sandy Bay are sometimes not able to respond quick enough.”