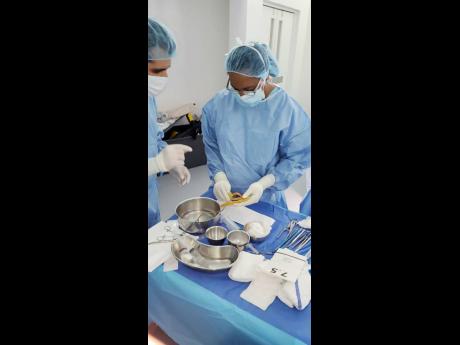 Contributed
Dr Tasha Cooke (right) is assisted during the implantation of a penile prosthesis at Urology West in St James on Wednesday. Cooke has called for insurers to include erectile dysfunction in their coverage portfolio.

WESTERN BUREAU: A local urologist is urging insurance companies to expand coverage of illnesses to erectile dysfunction, an ailment that has a crippling impact on relationships and perceptions of male self-worth and which is a growing concern for...

A local urologist is urging insurance companies to expand coverage of illnesses to erectile dysfunction, an ailment that has a crippling impact on relationships and perceptions of male self-worth and which is a growing concern for men with lifestyle diseases.

Dr Tasha Cooke conducted the implantation of an inflatable penile prosthesis on a patient on Wednesday - a two-hour-long procedure that is rarely performed in Jamaica. Cooke’s operation was reportedly the first such in the western end of the island.

The cost of the implantation, US$17,000 (J$2.5 million), is prohibitive for most Jamaican men, and Cooke wants local insurance companies to reform their policy philosophy. She is confident that locals will warm up to the option.

“I would love to urge the insurance companies to come on board. I am sure there are innovative ways in which they could include prosthetic urology in their plans because this is not a nice-to-have. It is a need-to-have,” Cooke told The Gleaner on Wednesday.

This is not the first time such an operation has been undertaken in Jamaica. In the past, doctors in Kingston have done it with visiting professors.

However, Cooke is on a drive to have the option readily accessible to more Jamaicans.

In 2010, she received a fellowship to study female urology, reconstruction (including prosthetics urology), and incontinence at the University of Miami in Florida.

The senior consultant at the urology department at the Cornwall Regional Hospital has first-hand knowledge of the hundreds of men who have lost their erection and who often suffer in silence from the knock-on impact of high blood pressure and diabetes or after prostate cancer surgery.

“Yet you find that because of these lifestyle diseases, some men have to give up having sex, and for some of them, it is like death as there is no point in living,” the urologist said.

She noted that it also matters a lot to the women in these men’s lives.

“It is important for female satisfaction. A lot of people lose their relationship because of this,” she said, adding that surgery becomes the next option when enhancers such as Cialis, Viagra, and Levitra no longer work for partners.

The UWI associate lecturer said that she was aware that a number of affected men become afraid of getting into relationships because they cannot satisfy their partner sexually.

The urologist said that the implant does not disrupt sensation in the penis.

“The device has two rods which are placed inside the shaft of the penis. There is a little pump in the scrotum (feels like an extra testicle), but when you are ready for intercourse, you just pump it up (inflate the device),” she said.

“The penis stays up, until the man squeezes the pump and brings it down.”

Intercourse can be safely had six to eight weeks after surgery.

A relatively short procedure, she said patients are usually able to go home the same day.

“After the procedure, the patients are taught how to use the device, and once the healing is sufficient, they are usually able to go back to having intercourse,” she said.