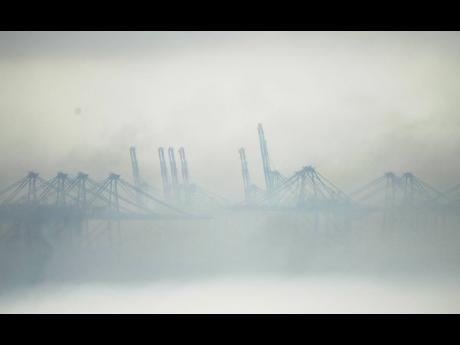 File
A view from Plantation Heights showing the Kingston Wharves covered in thick smoke coming from the Riverton City dump.

The Government’s decision to pay out nearly $25 million to Jamaicans following a breach of their constitutional right to enjoy a healthy and productive environment is being celebrated by Public Defender Arlene Harrison-Henry, whose office assisted...

The Government’s decision to pay out nearly $25 million to Jamaicans following a breach of their constitutional right to enjoy a healthy and productive environment is being celebrated by Public Defender Arlene Harrison-Henry, whose office assisted the claimants.

However, she wants more to be done for those affected by fires at dump sites.

The Cabinet has approved the payment of more than $20 million to several persons who were affected by a massive fire at the Riverton City dump in March 2015, which resulted in 800 Jamaicans seeking medical treatment. Many were affected by traffic pile-ups, business and port closures, and the rescheduling of the Grade Six Achievement Test.

The Government has also agreed to pay more than $4.5 million to individuals who successfully brought claims against the National Solid Waste Management Authority (NSWMA) for a 2012 fire at the Kingston dump.

A total of 21 persons will be compensated for losses and damages.

Harrison-Henry told The Gleaner on Wednesday that professional advice and legal representation was provided to the claimants through her office based on claims that their constitutional rights had been infringed as a result of the fires. This service is part of her office’s statutory jurisdiction under the Public Defender Interim Act.

“It wasn’t only because people developed sniffles or respiratory problems,” she said.

Harrison-Henry said that her office has received complaints from persons who have been affected by fires from dump sites located across the island but revealed that reports that could assist in the investigations are still outstanding.

“I don’t think we take dust nuisance and other pollutants in the air seriously enough,” she said.

Minister of Information Fayval Williams announced during Wednesday’s post-Cabinet press briefing that claimants suffered personal injuries and incurred expenses as a result of the fires.

“The fire lasted several days, and the smoke-abatement process lasted approximately 17 days. Thick, persistent smoke had resulted in toxic fumes [and] blanketed entire communities in the parishes of St Catherine, St Andrew, and Kingston and produced a nuisance to several communities,” she said in relation to the February 2012 blaze.

In the 2015 fire, it was found that the NSWMA had breached its obligation under the National Solid Waste Management Act 2001 by failing to take the necessary steps for the effective management of solid waste at the Riverton site in order to safeguard public health.

The March 2015 fire has been deemed one of the worst in the nation’s history.

The National Environment and Planning Agency concluded at the time that the fire created a “negative impact on the ambient air quality”.

A NEPA report based on the findings of an air-quality test conducted in Canada found that the cancer-causing chemical, benzene, and related compounds, showed the highest increase in concentration among the 26 volatile organic compounds that were detected in samples submitted by the Jamaican Government.

The fire started around March 7 and continued until around March 29. It affected the health and well-being of residents in Kingston and St Andrew and parts of St Catherine, including Portmore.

Harrison-Henry said that while the agreed compensation announced by the Government is good, she is concerned about the long-term impact of the fire particularly on those who lived nearby.

“We have made a recommendation that approximately 800 persons that we had identified should be seen at least once a year for any long-term impact on their health as a result of fires. This relates to persons who live close to Riverton,” she said.

Environmentalist and founding member of the Jamaica Environment Trust (JET), Diana McCaulay, is pleased that citizens will be compensated

“One of the things I have learnt over the years being at JET is that we only have those rights we are prepared to assert,” said McCaulay.

Chairman of the NSWMA, Dennis Chung, said that the Government will save billions of dollars once the Riverton dump is divested. The authority, which is a regulatory body, is eager to get the site off its hands.

“We don’t get enough money to run the operations, so the quicker it happens is the better it is for us,” he said.

In 2016, Lyttleton Shirley was announced as the head of a nine-member enterprise team charged with leading the divestment of the Riverton City dump and other sites across the island. The team was appointed by Prime Minister Andrew Holness.

Chung pointed out that efforts to divest the site predated his appointment in 2015.

Up to two years ago, he was getting calls from interested investors on a monthly basis, with one wanting to invest more than US$1 billion.

The latest update he received on the site was a few weeks ago when he was informed that the divestment committee was requesting proposals from interested persons.