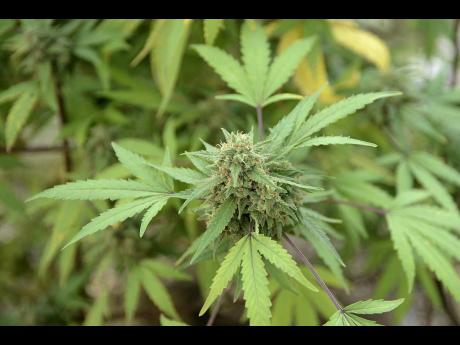 File
Ganja investors are reportedly frustrated at export hurdles that have put the brakes on the nascent medicinal marijuana industry.

A government lawmaker has raised alarm that some investors in Jamaica’s cannabis industry are ready to pull out because of inertia on the export policy, with at least two stakeholders already abandoning the sector.

Multimillion-dollar United States currency investments are said to be at stake.

“Having paid for all these licences and expecting to be in a position that they would start to export, nothing is happening in that regard,” said Juliet Holness, member of parliament for St Andrew East Rural.

She warned that the cannabis industry would grind to a halt if the ambitious plans floated since the 2015 decriminalisation of certain quantities of marijuana did not materialise.

Holness, who is a member of Parliament’s Public Administration and Appropriations Committee (PAAC), said on Wednesday that she had not seen evidence that Jamaica had made major strides in export.

Technocrats from the Ministry of Industry, Investment and Commerce appeared before the committee to provide an update on various industries that would help to drive economic recovery in the wake of the impact of COVID-19.

The PAAC member said she had taken note that the US was moving to accept deposits and accounts for persons who were in the cannabis industry.

Noting that the move was a major development for players in the US, she queried how this would impact stakeholders in Jamaica.

“Are we still in a position where our banks will not take monies from persons in that type of business, and do we genuinely see any synergy and opportunities between the banking sector and their ability to export and to save and to grow these businesses?” Holness questioned officials from the Cannabis Licensing Authority (CLA).

She suggested that the strain of Jamaica’s marijuana might have been taken and used to establish successful cannabis businesses in other jurisdictions.

“I get the sense that we are put in a place where persons have come and almost got what our marijuana is like, and they are growing businesses nicely in Australia, in Israel, and Canada, everywhere else, and by the time Jamaica is let into the market, we are dead.”

She wants the Cannabis Licensing Authority to provide a comprehensive brief on developments in the local cannabis sector at the next meeting of the committee on July 7.

Faith Graham, the acting chief executive officer (CEO) of the CLA, told the committee that the cannabis markets globally were not open as players were trying to build their own domestic industries.

She said that the CLA has approved 42 export authorisations since 2018.

Graham said that Jamaica was working with standards agencies in some of the jurisdictions that were open to importing cannabis.

The CLA boss said that cannabis businesses in Jamaica have made exports to Canada. She said that other countries being targeted for exports are Australia, Germany, and Zimbabwe.

Graham disclosed that the CLA had no restrictions on export quantities.

“The export that has been facilitated to date is what is requested of us by the industry, so if they come with a whole lot more, they would be issued with a permit for a whole lot more.”

Graham also divulged that there was a 44 per cent reduction in the number of licences issued to players in the cannabis industry over the period 2019-2020 and 2020-21.

She said that 29 licences have been granted over the period. In the last several months, no additional permits have been awarded.

There was also a 63 per cent decline in applications received by the CLA for the period under review.

Graham blamed the fall-off in the sector on the COVID-19 pandemic, noting that many players had expressed fear in advancing their businesses during the pandemic.

With a cloud of uncertainty hanging over the sector, Graham said that two cultivators had left the industry.

In terms of trading within the closed-group system, the CLA boss reported a 30 per cent reduction.

Graham said that players in the cannabis sector had to lay off workers owing to the impact of COVID-19.