No easy fix for Norwood 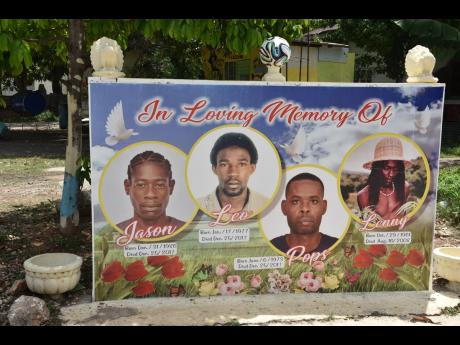 Mark Titus
Mark Titus Murals in Norwood, St James pay homage to some of their fallen over the years 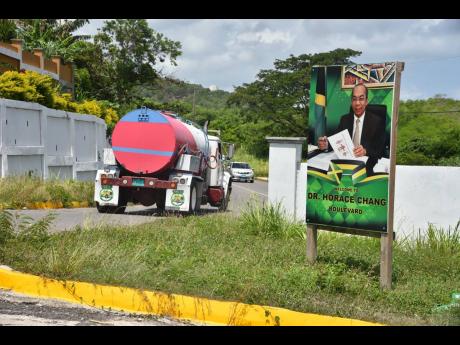 Mark Titus
The Dr Horace Chang Boulevard, running from the Ironshore/ Quebec Avenue intersection into the community of Norwood, honours the member of parliament for St James North West. 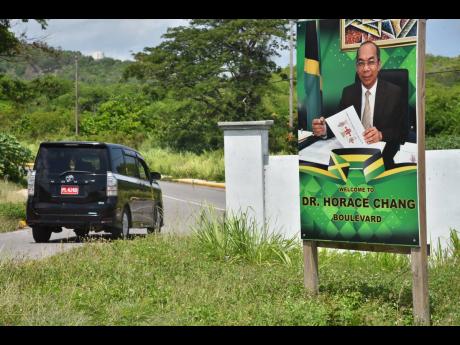 Mark Titus
The Dr Horace Chang Boulevard, running from the Ironshore/Quebec Avenue intersection into the community of Norwood, honours the member of parliament for St James North West.
1
2
3

Residents in Norwood, St James say gang warfare and political interference have prevented the sustainable execution of social intervention programmes in the volatile community, leaving them to fend for themselves over the years.

The community is the latest beneficiary of the Government’s zone of special operations (ZOSO), which has social intervention as a key component.

In announcing the initiative last week, Prime Minister Andrew Holness revealed that, since the start of the year, there have been 15 murders and 14 shootings spanning a mere one-square kilometre of space in the battle-worn community, which forms part of the constituency of St James North West represented by his deputy prime minister and minister of national security, Dr Horace Chang, since 2002.

While Bev, a supervisor in the services industry, supports the ZOSO in principle, she describes the move as putting the cart before the horse. “Social intervention without addressing the root cause is like dressing a sore without cleaning it,” she reasoned with The Sunday Gleaner on Wednesday. “I am not a criminal but I can lose my life just because I live in one of the areas involved.”

Bev continued, “This is a turf war between Wugga Lane and Gulf, so even the baby that is just born has to start defending themselves from very early. The attacks can come at any time, and I am sure that, if we were not able to defend ourselves, many would have died.”

According to a 2017 community safety plan compiled by the St James Social Development Commission (SDC), the proliferation of guns, lack of social intervention and the absence of the police post were among the main concerns of Norwood residents. “Shots are fired every night and day, the police’s lack of quick response from the cry or call of residents makes the gunmen more brazen,” a portion of the document read.

According to the report, residents are also of the view that the political representatives in the constituency can do more to assist anti-gang efforts by the police. However, speaking to The Sunday Gleaner during a tour of the community yesterday, Dr Chang theorised that the increase in gangs during his tenure was because of their access to cash from the illicit lottery scam since 2006.

Businessman George Hamilton, who lost in his bid to wrest the constituency from the incumbent at the 2020 general election, does not agree that he can influence the gangsters, but noted that a community education initiative could create a greater understanding among the residents.

“Let me make it clear that we don’t benefit from gunmen, they have not done anything for us in politics,” he said when pressed. “What we do is, we focus on the people and the development of the community. When we campaign, we don’t try to get gunmen in our campaign for them to influence others. What we deal with is the development of the community and the people,” he firmly stated.

However, Hamilton believes that Chang, who was honoured by the St James Municipal Corporation with the renaming of the roadway running from the Ironshore/Quebec Avenue intersection into the community to the Dr Horace Chang Boulevard, could use his influence to provoke change.

“The same approach used in the last election to win the northwest St James seat should be doubled towards identifying the gangsters and removing them from the community, with the hope of reforming them,” Hamilton said.

For Assistant Commissioner of Police Clifford Chambers, normal policing will not cure the ills in Norwood, but he believes a more hands-on, conciliatory approach would be effective.

“Normal policing is operational in a state of mental and physiological normalcy,” he said. “That cannot work for Norwood at this stage, because one has to understand that, even though you lose a loved one, it’s not necessary for you to put another person through the same pain and suffering.”

GENERAL ON EVERY CORNER

Police Commissioner Major General Antony Anderson has refused to name the six gangs that the police have suggested are operational in Norwood, but The Sunday Gleaner has learned that the cops have zoomed in on the 24/52 and 51/61 gangs – umbrella gangs actively seeking to strengthen their criminal network by merging with the Wugga Lane, Church Lane, Jamal, and Hollywood shooters.

However, The Sunday Gleaner found that, unlike the inner-city communities in other locations in Jamaica where dons control the entire community, every street or block in Norwood has its own general.

“So if one genna has a disagreement with another genna, that will lead to a serious conflict and, even if you have family living on the other side, it is you against them,” a former gangster explained. “As long as you are from certain communities, you are automatically on the battlefield. They not only target each other but go after family, friends and other close associates of gang members.”

Some of the street-based outfits identified by The Sunday Gleaner include the Wariker, Middle East, Cherry Gardens, Daca Tone and Gulf Bottom.

“What I know about is turf or territorial war among the guys in different lanes,” the former gangster said. “It is natural that, if you are attacked, you are going to defend yourself and some that are called gangs are just people who are defending their turf, because they even fight among themselves.”

Residents are also critical of the responsiveness of the police, who they claim turn up after the shootings subside.

“Government must show that they are serious about crime reduction by placing a permanent police post in Norwood and engaging the warring sides to put an end to it,” said a resident in Hendon Norwood. “If the police cannot win the confidence of the people, then they will show more respect to those who will defend their homes from attacks.”