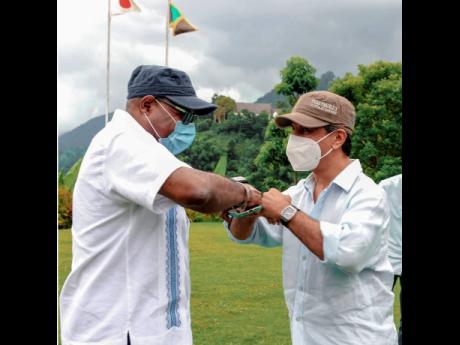 A document is now being drafted by Jamaica and Mexico that will enable large airlines from as far as Middle Eastern destinations such as Saudi Arabia to offer multiple experiences in Latin America and the Caribbean under a single marketing arrangement and pricing mechanism.

The five countries leading the effort are Cuba, Panama, the Dominican Republic, Mexico, and Jamaica, Minister Edmund Bartlett told The Gleaner on Saturday.

The deal was cemented by Saudi Minister of Tourism Ahmed Al Khateeb during a visit to Jamaica last week, where air connectivity, tourism investment, logistics, and water and vaccine equity topped the agenda.

The two ministers, who met last October in Cancun, Mexico, during the first face-to-face tourism confab, and again in Saudi Arabia recently, reportedly left the meetings satisfied that opening the gateway of the Middle East to the region would provide immense potential for tourism.

A project of this magnitude would expose the region to some of the world’s largest airlines such as Etihad, Saudi Airlines, and Emirates.

The size of the Saudi market is roughly seven million people, with a spending power of US$20 billion annually on outbound tourism.

“One of the key benefits is to establish hubs and spokes, where airlines can come into a particular destination and then the tourists are dispersed to other destinations via domestic air,” said Bartlett.

“Panama is a big gateway to the south, from which a lot of the distribution from South America takes place, and Jamaica can now become a distribution for the northern Caribbean.”

All five countries have the capacity to create distribution centres, which would, in turn, strengthen regional carriers such as Cayman Airways, Caribbean Airlines, and InterCaribe, added Bartlett, who noted that the move would call for a rationalisation of protocols.

“For example, the creation of a single visa regime, something like the Schenghen visa, which would allow the visitor to have domestic benefits to landing in any one of the five countries,” he said.

The major benefit would be a boon in visitor arrivals to the Caribbean, providing opportunities for expansion in the development of industries and employment, while bolstering the flow of foreign exchange and foreign direct investments.

The Saudi minister, who is also chairman of the multibillion-dollar US-currency Saudi Fund for Development, also participated in discussions around the partnership between the Global Resilient Crisis Management Centre at the University of the West Indies, Mona, and the proposed Sustainability Academy, to be established in the Middle East country.

It was during those meetings that Bartlett said he emphasised the difficulty the region was experiencing in accessing COVID-19 vaccines.

The Caribbean, perhaps the most tourism-dependent area on Earth, is at risk of not achieving full recovery because it is among the least-vaccinated regions.