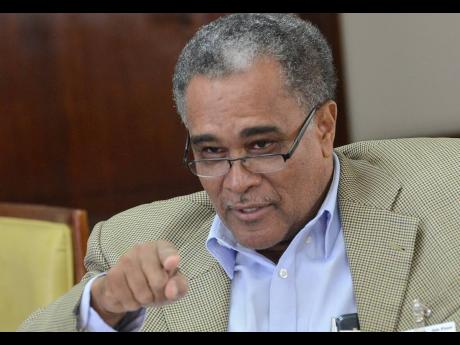 The US$3-million (J$409-million) investment in First Rock Capital Holdings by the Airports Authority of Jamaica (AAJ) and a subsidiary has shocked a former board chairman, Dennis Morrison, who says up to the time he left office, the public body was...

The US$3-million (J$409-million) investment in First Rock Capital Holdings by the Airports Authority of Jamaica (AAJ) and a subsidiary has shocked a former board chairman, Dennis Morrison, who says up to the time he left office, the public body was even borrowing money for core functions.

And with news that the shares are to be sold, the Opposition People’s National Party (PNP) has joined calls for further investigation of the purchase, with Julian Robinson, finance spokesman, indicating he will table questions on the issue today in the House of Representatives for Finance Minister Dr Nigel Clarke to answer.

Morrison held two stints as AAJ chairman, with his more recent being 2012-2016, the period of the Portia Simpson Miller administration.

He argued that even with the financial relief from the 2018 divestment of the Norman Manley International Airport, the AAJ’s struggles would not have so abated to allow a “non-core” expenditure in First Rock, the St Lucia-registered start-up private equity company that began operations in 2019.

“It (AAJ) had to go and borrow money to do work on the runway at Montego Bay airport and at Norman Manley, too,” Morrison told The Gleaner on Monday, adding, “I don’t think you could say it’s the usual expenditure.”

Morrison said he does not recall the AAJ making any similar investments during his tenure.

The AAJ Act allows the investment of money “not immediately required” for the authority’s functions.

The opposition spokesman, meanwhile, says the Integrity Commission should probe the investment to determine whether it complied with the standards of “openness, transparency and good governance”.

“I am concerned about the potential conflicts of interest that arise from this investment,” said Robinson, who said he will question the Government’s investment policy for public bodies, the types of investments that can be made, and the amount in any single company.

“We need some clarity on that because we don’t know how many other public bodies have made, or are making, similar-type equity investments in private companies,” he said.

Fay Hutchinson overlapped as a director of First Rock, in which she is a shareholder, while serving as deputy, and then chair of the AAJ, a Sunday Gleaner investigation found.

Hutchinson, who has been on the AAJ’s board since April 2016, became deputy chair in May 2019 and has been chairperson since November 2020.

The businesswoman and insurance sales executive, who has close ties with the ruling Jamaica Labour Party, even serving as an officer, resigned from First Rock’s board on March 17, one year after her appointment, reportedly under pressure from officials at the Robert Montague-led Ministry of Transport.

Hutchinson bought her one million units of shares in February 2019, the same time the AAJ and the NMIA Airports Limited bought their first stake. The entities bought a second set in a January 2020 IPO.

With approximately 14.3 million shares each, the NMIAL and the AAJ were listed as the third and fourth-largest shareholders, respectively, in First Rock, according to the company’s unaudited financial statement for the quarter ending March 31, 2021.

Another public entity, the National Insurance Fund (NIF), the state’s pension fund that has been under scrutiny, is the seventh-largest shareholder in First Rock, with 10 million shares (3.5 per cent).

Hutchinson’s son, Andre Hutchinson, has been a member of NIF’s board since 2018.

Andre, who declared his interest and recused himself from discussions about the shares, said the NIF’s parent body, the Ministry of Labour, has declared that it is satisfied there was no conflict of interest and that the investment was properly approved.

“The FRC (First Rock Capital Holdings) investments were approved by the respective boards of AAJ and NMIAL and were done in accordance with the Ministry of Finance-endorsed AAJ Group Investment Policy within its limit for this category of investment,” the group said in a statement provided by Audley Deidrick, president and CEO.

On Monday, Deidrick said he was travelling and could not answer in time whether the AAJ has shares in other companies.