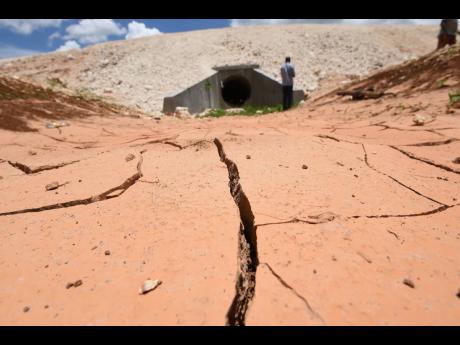 Ian Allen/Photographer
A man walks towards a drain running below the under-construction highway that runs through the district of Redberry, Manchester. Resident Stephen Griffiths fears that the road alignment will cause flooding in the community. 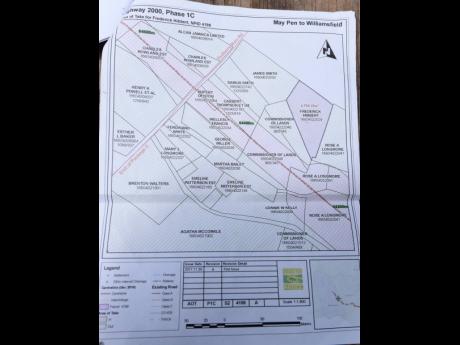 Ian Allen/Photographer
A document presented by a resident of Redberry, Manchester. Property owners have had grievances with builders of the highway through the community. 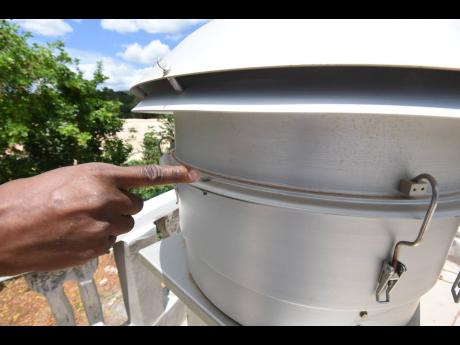 After spending years abroad, Stephen Griffiths returned to the land of his birth to build a house, settle down, and do a bit of farming.

The furthest thing from his mind was being embroiled in a dispute with China Harbour Engineering Company (CHEC) and the National Road Operating and Constructing Company Limited (NROCC) over the Highway 2000 project which has had a negative impact on his property and daily life.

The claims and counterclaims in Griffiths’ experience is a snapshot of the clash of forces between tradition and innovation, marking a cultural crossroads in the conflicting narrative of development.

The disgruntled resident told The Gleaner on Friday that the first encounter he had with NROCC was in 2017 when a representative from the company delivered a copy of the Jamaica Gazette at his home in Redberry, Manchester.

The government notice listed several tracts of land, including his property, that were likely to be acquired by the State for the construction of Phase 1C of the highway.

Griffiths said he was told by the NROCC representative that he should cease construction works on his house. But he said that up to 2020, no one from NROCC approached him to negotiate a price for his property and so he continued work on his house.

The returned resident said that building costs had skyrocketed over the period he was told to cease construction. And in a stunning about-turn, Griffiths said that NROCC has seemingly scrapped plans to acquire his property without notifying him.

“I have waited two and a half years to finish that while the material costs were climbing ... because when I could buy a bag of cement for $950, I am now paying $1,300,” he told The Gleaner.

Pointing to several cracks to the interior and exterior of his house, Griffiths said that the nearby construction works have wreaked havoc.

He claimed that CHEC officials had verified that his building was crack-free before the construction project commenced.

Griffiths argued that state officials have not protected the interests of Jamaicans, allowing foreign investors like CHEC to have the upper hand.

“Because they have got the Government’s backing, they think they can just do anything, because once they leave here, we end up with the bill,” Griffiths said.

“How can you have a different entity come to your country and dictate to you?”

After complaining about the dust nuisance, Griffiths said that CHEC installed equipment on his roof to ascertain if his claims were true.

However, when the Gleaner news team examined the ‘dust detector’, the equipment itself was covered in dust.

Another looming problem facing the resident is a flood threat whenever it rains heavily.

According to Griffiths, before the highway project started, there were about two acres of land in which overflowing water from other areas would settle and eventually soak away into the earth.

The highway works, he said, have significantly eaten into that soakaway.

“Where is that water going?” he questioned.

“I am asking them before it gets too late to come and talk to me and tell me what’s your plan.”

Responding to Griffiths’ concerns, environment, health and safety engineer at CHEC, Valton Simpson, said that a pre-construction survey had been done on all structures and dwellings that fell within a 100-metre radius of the edge of the road alignment right-of-way.

In an emailed response, Simpson said that at the end of the project’s activities, a post-construction survey would be conducted to determine any variance in the integrity of the structures and buildings that were previously captured.

Simpson also commented on the likelihood of Griffiths’ property being inundated if heavy rainfall occurs.

He said that the “pertinent hydraulic due diligence had been done to capture and retain all the highway run-off in land acquired by NROCC, which is more than adequate to retain flood water for a rainfall return period of 100 years.”

Simpson said that based on the due diligence that was done, the flood risk to Graffiths’ property was negligible.

Meanwhile, Phillip Myers, land acquisition manager at NROCC, said that Griffiths was compensated for crops he planted on lands belonging to the commissioner of lands.