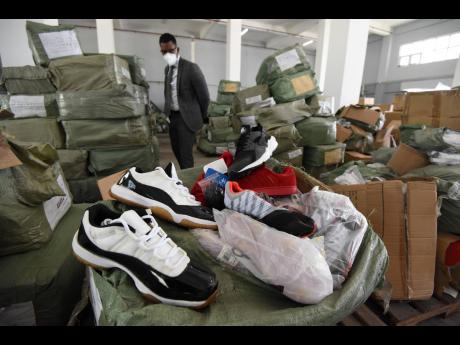 Ian Allen/Photographer
Mikail Jackson, partner in the law firm Livingston, Alexander & Levy, looks at goods seized under the Trade Marks and Copyright acts that were slated for destruction at a Jamaica Customs Agency facility in Kingston on Wednesday. The shredder used to destroy US$60 million of counterfeits was gifted to the agency by the British High Commission. 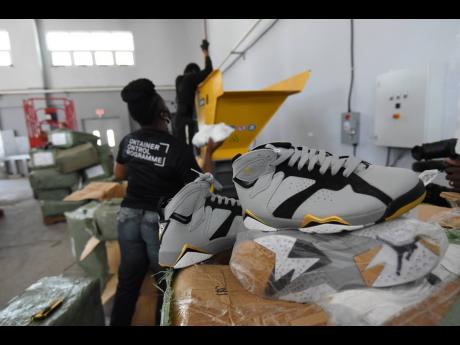 Ian Allen/Photographer
A worker at the Jamaica Customs Agency tosses counterfeit goods into a shredder at a state facility in Kingston on Wednesday.
1
2

Jamaica is fast becoming a prime dumping ground for counterfeit apparel and shoes manufactured in China and a key trans-shipment node to other markets in the Americas. That is the verdict of Albert Anderson, director of the Contraband Enforcement...

Jamaica is fast becoming a prime dumping ground for counterfeit apparel and shoes manufactured in China and a key trans-shipment node to other markets in the Americas.

That is the verdict of Albert Anderson, director of the Contraband Enforcement Team at the Jamaica Customs Agency as he watched Wednesday’s mass destruction of 13 container loads of knock-off goods valuing approximately US$60 million (J$9 billion) that were seized under the Trade Marks and Copyright acts.

The contraband has been in storage since 2017, the director said.

Anderson lamented that his agency could not be more proactive and efficient in intercepting the shipping of counterfeits because of age-old storage issues and other bureaucratic processes from detention, to forfeiture, to disposal.

Among the factors behind the lag is the requirement to give persons sufficient time to prove that the seized goods are authentic.

“We would normally have gotten verification already from the rights owners that these goods are not genuine,” Anderson said on Wednesday.

But more fundamentally, Anderson argued that the country’s Customs laws were outdated.

“One of the problems is that at the time when the Customs Act was being made, there weren’t counterfeit items, so based on that, it does not speak to counterfeit ... ,” said Anderson.

“That is why in a lot of the cases, you may go on the road and see counterfeit items and you say, ‘Well, how Customs did not seize this on the port?’”

The dependence on rights holders to flag suspected illicit shipments also hamstrings seizures and investigations, he told The Gleaner.

New proposed Customs legislation is currently being reviewed by a joint select committee of Parliament.

Attempts to get comment from Justice Minister Delroy Chuck were unsuccessful as calls to his mobile phone went unanswered.

Mikhail Jackson, the attorney-at-law for the trademark holders who oversaw the destruction of the counterfeits in Kingston on Wednesday, said that publicity surrounding the exercise was an important signal to lawbreakers that Customs was committed to cracking down on intellectual property breaches in Jamaica.

“Jamaica is crucially positioned in the region as an important logistics and trans-shipment point, so you find that you have containers coming through Jamaica that are headed to many other jurisdictions,” Jackson said.

He strongly believes that there is a direct link between counterfeit trade and criminal activity.

Jackson noted that the illegal items were destroyed and not given to charity because many items were not produced in accordance with regulatory standards and posed a safety risk to the public.

“They use substandard dye, substandard chemicals in trying to produce a copy as quickly as possible,” Jackson said, adding that the knock-offs may also cause injury.

The British High Commission gifted the shredder to the agency.