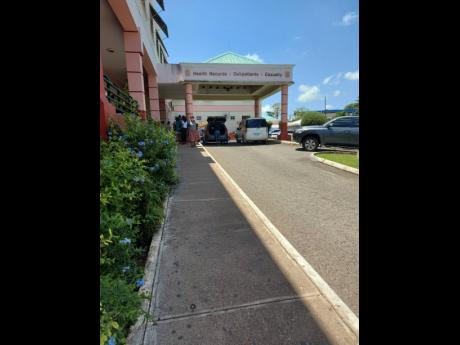 Photo by Tamara Bailey
Patients leaving the outpatient department of Mandeville Regional Hospital on Thursday after approximately 90 per cent of junior doctors failed to show up for work. 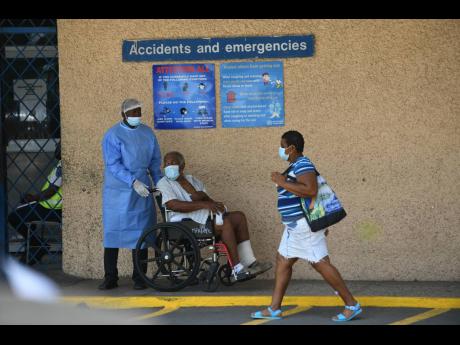 Gladstone Taylor/Multimedia Photo Editor
A patient is assisted at Kingston Public Hospital on Thursday. Hundreds of junior doctors across the island staged a sickout over a simmering contracts row, crippling services at many hospitals. 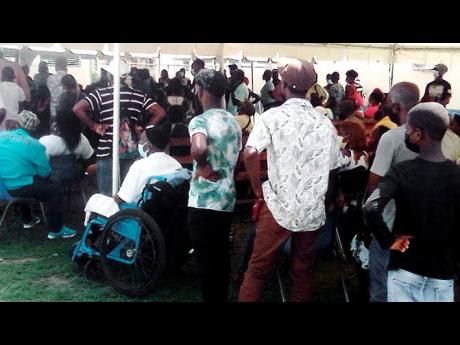 Photo by Ruddy Mathison
Dozens of outpatients wait for medical attention at Spanish Town Hospital. None of the 157 junior doctors turned up for work Thursday.
1
2
3

Operations at hospitals in Clarendon were disrupted on Thursday as 26 medical doctors who were scheduled for duty called in sick.

Eugena Clarke-James, acting chief executive officer, told The Gleaner that the May Pen Hospital was trying to source additional staff to aid operations at the Accident and Emergency Department, following a sickout by 21 physicians.

​Four doctors from the Lionel Town Hospital, and one from the Clarendon Health Department, also called in sick.

According to the Southern Regional Health Authority (SRHA), all outpatient and curative clinics were rescheduled. Patients on wards were assessed and those deemed well enough were discharged.

A total of 158 of the 302 doctors scheduled for duty on Thursday did not turn up for work, forcing the hospitals across the SRHA into emergency mode.

People’s National Party’s Junior Spokesperson on Health Jesse James Clarke said that, while it was unfortunate that doctors sat out from work, it is not too late for the Government to offer redress.

“The minister of health and wellness should resolve the issues facing the disgruntled medical staff to ensure that normality is returned to the sector. We cannot use the excuse that there is no funding to pay our health staff while simultaneously pursuing the construction of a new parliament building,” he contended.

Clarke said the healthcare sector has been subjecting staff to low salaries and inadequate resources.

“We cannot match the compensation packages of developed countries, but we can do better,” the junior spokesman said.

Dr Aujae Dixon argued that six-month contracts was evidence of unfair treatment being meted out to physicians. He lamented that healthcare workers were being taken for granted.

“Six-month contracts leave no job security and are unconscionable. The job is stressful and the hours long. The added stress of not being compensated or compensated adequately is not a stress that doctors need to have,” he said.

Dixon questioned the feasibility of the reviews of medical officer posts.

“Hospitals and health centres are nowhere near well-staffed as is being purported. There’s no time for a five- or 10-year review. It needs to be done much quicker than that,” Dixon told The Gleaner.

Manchester: ‘We can’t go beyond tomorrow’

Scores of people who visited the Mandeville Regional Hospital (MRH) on Thursday were turned away and issued new appointment dates - some up to eight weeks later - after approximately 90 per cent of junior doctors failed to show up for work.

“I have been here from 7:30 this morning and it was when I get here I hear that the doctors not working and we won’t get through today,” said an elderly patient who has a heart condition.

Operations at the Manchester Health Centre were similar hobbled, as persons were seen leaving the facility in disappointment.

A patient who requested anonymity said that she would have to wait for a doctor to assess her X-ray results.

“I guess it is not so important, but it’s the price we pay for not being able to afford private healthcare,” the woman quipped.

Senior medical officer at Mandeville Regional, Dr Everton McIntosh, disclosed that only high-priority cases would be addressed until normality is returned.

The hospital went into emergency mode, with senior doctors holding the fort. Elective surgeries were suspended. The facility discharged as many persons as possible to ease the caseload.

McIntosh revealed that an extension of the sickout could cripple operations.

Mandeville Regional has approximately 24 consultants and close to 70 junior doctors.

“I don’t know what arrangements are being made between them and the Government, but we know we can’t go beyond tomorrow (Friday),” the senior medical officer said.

Regional director at the Southern Regional Heath Authority (SRHA), Michael Bent, confirmed that a number of private practitioners have since been called in to help with the workload at the Mandeville Regional and Percy Junor hospitals.

Twelve of the 16 junior doctors at Percy Junor did not turn up for work.

Chairman of the SRHA, Wayne Chen, said some hospitals have been affected more than others and a number of retired doctors have chipped in.

Barrington Facey and common-law wife Veronica Morgan reported on Thursday that their appointments were pushed back by six months after waiting a year to see the ophthalmologist at the Kingston Public Hospital (KPH).

That was one of the punishing consequences of the sickout at KPH as doctors pressed the Government to retreat in a contracts dispute.

Dwight Brown, a patient on the orthopaedic clinic, turned up to have his bandages changed and for a review to be done of his broken ankle.

He, too, faced a rescheduled appointment.

“Anything the prime minister have to do, him must do as soon as possible to get the people up and running,” said the Jones Town resident, irritated at having to move back and forth between departments, reportedly for two hours, to retrieve his card.

Dr Natalie Whylie, senior medical officer at the KPH, said that 64 of 198 junior doctors showed up for work on Thursday.

“We have had to significantly curtail our outpatient services. We have had to cancel all of our elective surgical procedures that were scheduled for today (Thursday), so that senior doctors and the remaining junior doctors can focus on the management of the inpatients and the emergency cases that continue to come to the hospital,” Whylie told The Gleaner.

All 50 consultants scheduled for work were present.