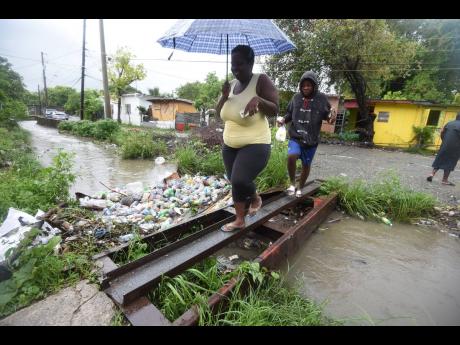 Ian Allen/Photographer
Residents of Bamboo River in Morant Bay, St Thomas, use a makeshift footbridge to access their community during rainfall from Tropical Storm Elsa on Sunday.

“We are all in danger down here.”

That was the pithy and profound analysis of Antonio Williams, a resident of Bamboo River who is fearful that the 2021 Atlantic Hurricane Season will bring another round of woe.

Folk in the St Thomas community recounted how, as Tropical Storm Elsa’s rains poured down on Sunday, they joined forces to clear a channel that was clogged with garbage so that floodwaters could flow freely from a major drain on the Morant Bay main road to the seaside.

Williams has two concerns: the impending collapse of a river groyne and a waterway that has been widened by tractor operators, creating a pond that is a constant flood headache. He said the waterway was once so narrow persons used to hop over it.

The flood woes date back at least a decade, he said.

“When a rainy time, everybody always on the alert. Sometimes we have to use some old fridge and go tek people from around there ... swing dem cross some place and rescue them so nobody never really drowns, but it’s a disaster waiting to happen, and it’s going to happen very soon,” Williams said.

He is not alone in his irritation.

Kimone Hunter told The Gleaner that she is sick and tired of having to evacuate her home during severe weather events. And the mother of three is peeved at having to feel like an unwelcome guest every time she has to bunk with others.

Hunter is appealing for the relevant works and municipal agencies to either fix Bamboo River’s issues or permanently have residents relocated.

“Every time the rain fall, we have to move because the water a come in, so we have to go up by the school or find a family residence. Mi nuh like that style because mi nuh like people tired of me,” an exasperated Hunter said.

Keith Williams, one of the residents who helped to clear the channel on Sunday, said that householders felt abandoned by the authorities. He is also frustrated with the promises.

Williams and other men of the community put their shoulder to the wheel and shovelled away the build-up of silt and garbage, carving out a channel for the run-off.

But that temporary fix is no salve for Hunter, who is always in emergency mode. She has at the ready a knapsack with important documents and has an exit plan to “fling mi bag pon mi back and mi and mi babyfather and children run leave everything”.

For now, she will continue to sleep with one eye open – or as she calls it, ‘puss nap’.

“Me always a pull the door a look how high the water reach,” Hunter told The Gleaner.