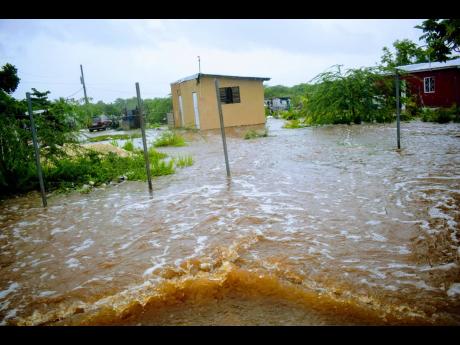 Anthony Minott/Photographer
A flooded street in Old Harbour Bay, St Catherine, on Sunday. Preliminary reports indicate that St Catherine and Clarendon were among the hardest-hit parishes. 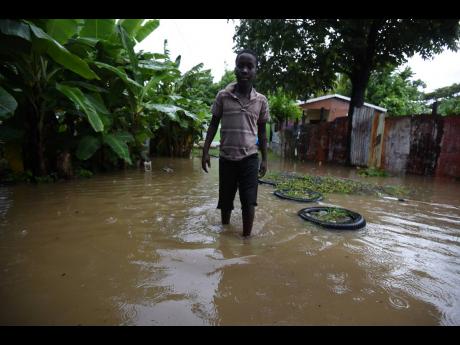 Ian Allen/Photographer
A boy walks through floodwaters in a yard in Bamboo River, Morant Bay, St Thomas, during the passage of Tropical Storm Elsa on Sunday. 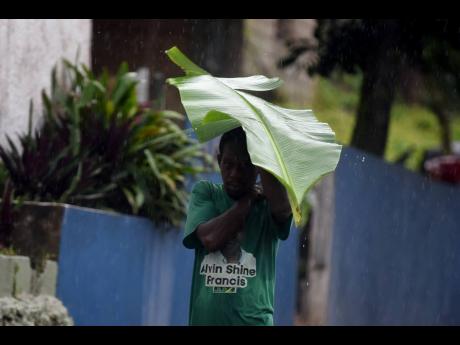 Kenyon Hemans/Photographer
A man shelters under a banana leaf along the Gordon Town main road on Sunday during storm rains.
1
2
3

Jamaica was spared the full wrath of Tropical Storm Elsa on Sunday but state authorities are already forecasting significant damage to the island’s road infrastructure, with sections of Clarendon and St Catherine appearing to have suffered the worst blows.

The tropical storm warning in effect for Jamaica was lifted on Sunday night as Elsa continued to move farther away from the island and towards Cuba and Florida.

“This means that the threat of tropical storm conditions no longer exists for the island,” the Meteorological Service said in its final bulletin released at 8 p.m. Sunday.

It said that at 7 p.m., the centre of Tropical Storm Elsa was located near latitude 20.2 degrees North, longitude 78.7 degrees West, or about 209 kilometres (130 miles) north-northwest of Montego Bay, or 160 kilometres (100 miles) south of Camaguey, Cuba.

“Although Elsa is considered no longer a threat to Jamaica, the island could continue to experience scattered showers and thunderstorms tonight (Sunday),” the Met Service said.

Also, several gullies in the Corporate Area and St Catherine were reported to have been in spate. Several roadways in those parishes were also impassable.

Manager of communication and customer services at the National Works Agency (NWA), Stephen Shaw, however, told The Gleaner Sunday evening that floodwaters in most areas had receded.

“We have some areas that we need to have the area cleared of wash-down silt and debris,” said Shaw, citing the Grants Pen main road in St Thomas and the Bog Walk Gorge as priority zones on the clean-up agenda for Monday.

Meanwhile, minister without portfolio in the Ministry of Economic Growth and Job Creation, Everald Warmington, said it was too early to speak about flood damage estimates but indicated that teams from the NWA would present a preliminary report to Cabinet on Monday morning.

“I understand that St Thomas is bad, but from what I have seen is that between southwest St Catherine, all the way back to Clarendon and Manchester, those areas have really, really been affected,” he added.

National Water Commission Corporate Communications Manager Andrew Canon for his part said the commission was still in the process of conducting a detailed assessment of Elsa’s impact on the agency’s supply infrastructure.

Initial reports pointed to systems in west rural and east rural St Andrew, as well as Trinityville and Cedar Valley in St Thomas, as worst affected.

However, Canon said there were no major reports of broken pipelines in the western end of the island.

The Jamaica Public Service Company reported that power outages were minimal and that the grid stood up well amid the storm rains.

There were blackouts in Waterworks, Lawrence Tavern, and Queensborough in St Andrew; as well as Manchester and St Thomas.

According to the Office of Disaster Preparedness Management Authority, 13 shelters were activated in Clarendon, St Catherine, Kingston, and St Andrew. Up to press time, 30 persons occupied five of the shelters.

Trevor Palmer, who lives at Sharper Lane, said that he had never witnessed flooding on the scale of Sunday’s deluge.

“I have been living here for over 40 years now and it’s the first I have ever experienced water like this. First I ever have water come in the house, actually through the back door,” Palmer said.

Other flood-hit zones in Greater Old Harbour were Darlington Drive and the road in the vicinity of The Aviary.

Sandra Nembhard, president of the Old Harbour Community Development Committee, said that several homes in Buddho, Terminal, and Thompson Pen were under water.

Over in Bannister, the legendary Big Pond was again the bane of residents’ anger as flood rains blocked the main thoroughfare.

The NWA’s Shaw, in a recent interview, reported that more than $20 million was spent on excavation work at Big Pond aimed at alleviating perennial flooding. But that fix appears not to have borne fruit as the road was inundated on Sunday.

“The problem get worse. Di road is blocked as the water cannot run inside the pond, so it take over the road,” Melbourne Scarlett, a taxi operator, said.

Glenroy Somers, who resides in Bannister, theorised that the remedial works might have blocked several tributaries that lead the run-off into a sinkhole.

“The pond has to be fixed properly as it disrupts lives whenever there is rain. The authorities need to get the views of the local residents and address the matter at hand,” Somers told The Gleaner.

Warmington said on Sunday that Big Pond and other areas would receive priority attention.

“There are some funds that will have to be diverted to deal with the severe flooding in the constituency today (Sunday),” Warmington told The Gleaner.

“I am surprised that even the Rush Gully flooded the Gutters main road, causing flood damage to many.”