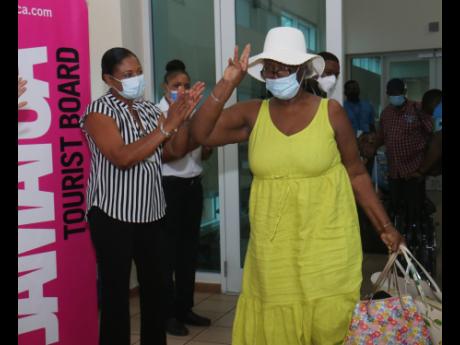 As Canada, the United Kingdom, and Europe reopen their markets to Jamaica, year-end tourist arrivals to the island have been revised upwards by half a million visitors from the original forecast of 1.3 million.

Arrivals in the last three months have averaged 15,000-16,000, particularly on weekends.

Bartlett made the disclosure during the arrival of two major carriers Sunday afternoon at the Sangster International Airport in Montego Bay.

Both Air Canada’s Dreamliner, out of Toronto, and Condor from Germany brought in more than 450 passengers into the tourism capital after several months of absence because of COVID-19 restrictions.

The sleek Air Canada aircraft, which has carrying capacity of 298 seats, flew only 60 per cent of that number into Sangster on Sunday.

However, Jamaica has the potential to capitalise on 280,000 seats from the island’s second largest source market this winter, said Angella Bennett, regional director of the Jamaica Tourist Board Canada.

“There is a surge in bookings for Jamaica from Canada, and this has happened since the government of Canada lifted the restrictions on international travel, the main one being the three-day mandatory quarantine for all Canadians returning to Canada or are fully vaccinated,” she said.

Oozing optimism about the upcoming months, Bennett said that all of Jamaica’s airline partners are expected back, with WestJet and Air Canada taking the lead.

Confidence of a return to profitability and recovery was shared by area chapter chair at the Jamaica Hotel and Tourist Association (JHTA), Nadine Spence, who said the increase in flights indicated a rebound in the travel industry. She said that the Canadian market was responsible for 22 per cent of tourists who visit Jamaica.

Montego Bay Deputy Mayor Richard Vernon was also on hand for the historic moment, noting that several persons who were unemployed can now tap jobs in an increasingly buoyant market.

Acknowledging that many Montegonians were dependent on the tourism industry, Vernon added that what he witnessed at the airport was extremely encouraging for the local economy.

Hours after the celebration that greeted the Canadians ended, Condor was met with a water salute. The German carrier, which has been flying to Jamaica for more than 20 years, had not visited Jamaican soil in 15 months.

Germany is not open to the UK or North America.