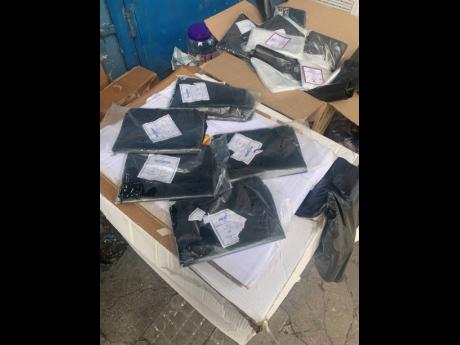 Photo by Judana Murphy
Single-use plastic shopping bags are being sold openly in the nation’s capital, metres from the Parliament which banned their importation and trade.

Enforcement and sanctions against the sale of single-use plastic appear to have collapsed as trading of the contraband items is done openly in the capital Kingston, a few hundred metres from the Parliament building that crafted legislaton against...

Enforcement and sanctions against the sale of single-use plastic appear to have collapsed as trading of the contraband items is done openly in the capital Kingston, a few hundred metres from the Parliament building that crafted legislaton against the practice.

The development is a blow to the robust environmental advocacy by then rookie Government Senator Matthew Samuda, who launched a campaign that led to the January 1, 2019, ban of single-use plastic bags, specifically the so-called ‘scandals’.

The law aimed to sign the death warrant for the proliferation of the plastics that littered streets and gullies, clogging drains and presenting a threat to the environment because they potentially take decades to degrade. It also points to the vulnerability of the island’s ports to import breaches.

The ban on the importation, manufacturing and distribution applies to bags with dimensions at or below 24 inches by 24 inches.

But shoppers were observed in downtown Kingston on Monday purchasing packs of the prohibited 8x12-inch bags for between $150 and $180 from different vendors. Both single and bulk buys were available.

Vendors also had standard ‘black T-shirt bags’ in bundles of 50 available for $500.

Persons were seen purchasing five T-shirt bags from a vendor for $20 each and 25 bags for $250 from another woman.

Four vendors selling from handcarts were seen with scandal bags, two of whom also had reusable alternatives.

Of six wholesales canvassed by The Gleaner on Monday, however, clerks said no plastic bags were available for sale.

At another wholesale, the female clerk said: “We nuh wah guh a jail.”

But it is unclear whether bulk sales can be made via backroom deals, as appeared to have happened with a businessman in Montego Bay, St James, who was arrested in May 2019 on suspicion of being a major distributor to supermarkets and shops.

Both orders carry a term of imprisonment of two years.

The concern about the Holness administration’s retreat on its anti-plastic crusade comes paradoxically days after the commemoration of International Plastic Bag Free Day on July 3.

Jamaica Environment Trust (JET) CEO Dr Theresa Rodriguez-Moodie told The Gleaner that there has been an overall reduction in the use of plastic bags, as people are using reusable options. But the practice of accepting even reusable bags counters the campaign for a complete culture change, said Rodriguez-Moodie.

“If everywhere I go, I accept these reusable bags, then eventually I will have so much of these bags that may at some point be discarded. There is a heavy reliance on constantly accepting other alternatives. We need to get into the practice of saying, ‘No. I don’t need a bag, I have my own bag’ or ‘No, I don’t need a paper bag,’” the CEO urged.

She added that reusable bags would eventually become waste and take a longer time to degrade.

Rodriguez-Moodie also raised concern that there are plastic bags on the market misidentified as ‘recyclable’ or ‘compostable’.

The JET CEO added that a waste characterisation study was crucial to determining whether there has been a reduction in plastic waste.

“We need to look at how we generate waste. Do we need all of this packaging? So, it’s not just about the consumers, it’s also about the manufacturers as well - how they produce and package,” said Rodriguez-Moodie.

Minister of Housing, Urban Renewal, Environment and Climate Change Pearnel Charles Jr said that although the “milestone national programme” has sparked widespread behavioural change, there are still challenges with plugging loopholes for the trade of prohibited items at wholesales, small retail stores, and markets.

Charles Jr said there might be a possible expansion of the ban later in the financial year to include other types of single-use plastic packaging used in the food and beverage industry.

It will target those items that have environmentally friendly alternatives readily available and accessible.

The environment minister said that Jamaicans have, for the most part, enthusiastically responded to the call to carry reusable cloth bags to supermarkets, and shopkeepers have joined the movement by providing paper bags as an alternative.

“Gullies, drains, roadways, and beaches are seeing less pollution due to single-waste plastics. It is my hope that the behaviour change impacts general waste disposal, pollution, and proactive protection of the environment,” Charles said.

He said the ministry continues to work closely with regulatory organisations, including the Jamaica Customs Agency, the National Environment and Planning Agency (NEPA), and the National Compliance and Regulatory Agency for enforcement of the ban.

He noted that through NEPA, Jamaicans can report breaches and obtain responses to queries concerning the ban.

Consumers may contact the NEPA hotline at 876-285- 853 or email policyonplasticban@nepa.gov.jm.

“Our ultimate goal is to protect the environment by managing how we dispose of our waste, especially plastic waste that we come into contact with for mere minutes, but last a lifetime in the environment,” Charles added.