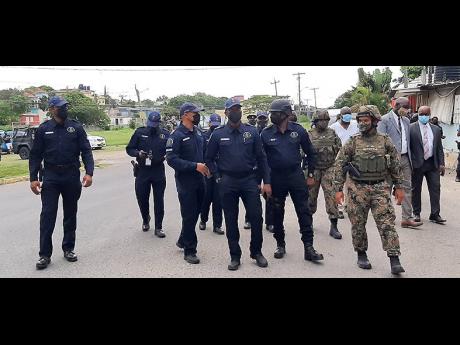 Despite the imposition of additional security measures in St James, the parish’s bloodletting continues to trend upwards as four more murders were recorded over the past four days.

Police data show that up to July 6, murders in the northwestern parish surged by 44 per cent from 59 to 85 compared to the corresponding period in 2020.

In the most recent incident on Tuesday morning along Sun Valley Road in Glendevon, armed men posing as police went to a house and murdered a 24-year-old man and physically assaulted his girlfriend.

The deceased man has been identified as Raldane Anthony Malcolm, a labourer of Sun Valley Road.

The police said that about 3:15 a.m., Malcolm and his girlfriend were at home in bed when three men posing as police officers knocked on their door and ordered them to open it, but they refused to comply.

The gunmen forced their way inside the house and fired at the fleeing couple, hitting Malcolm multiple times. They then assaulted the woman.

Malcolm and his girlfriend were taken to the Cornwall Regional Hospital, where he was pronounced dead and she was treated for bruises.

Sun Valley Road residents complained about living in fear as a result of ongoing violence, citing a gang war as the trigger.

“Di police dem naw do nothing much fi wi. Dem only come bout when somebody get kill,” a vendor, who identified herself as Deloris, told The Gleaner.

“It come in like a Wild Wild West up yah suh and the youth dem inna di place just a kill off each other, and innocent people a get ketch inna dem gang war.”

She believes that some of the incidents are linked to a spillover of violence from Norwood and Salt Spring.

Joint security forces have been carrying out major patrols within Glendevon and are following strong leads to apprehend the gunmen, a policeman said.

Prior to Malcolm’s murder, the Coral Gardens police reported that the body of an unidentified male was discovered with gunshot wounds in Providence, Flankers, on Monday morning.

That murder followed the killing of 28-year-old Conroy Campbell, otherwise called ‘Rat Bat’, of Church Hill, Flankers, on Saturday morning; and 29-year-old Ian Elliot, who was shot dead by armed men along Gordon Crescent in Granville.

A zone of special operations was recently established in Norwood, which is said to be the epicentre of the violence that has been plaguing St James.

Nationally, murders have risen five per cent to 725 compared to 689 last year.