Travel, wedding interests say ‘I do’ to MoBay 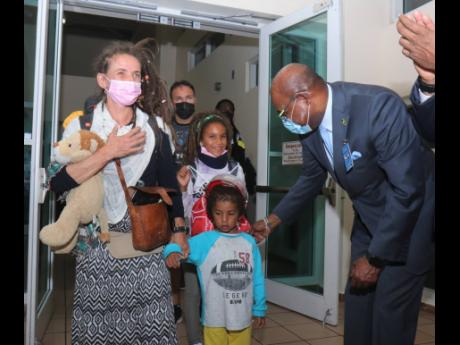 Ashley Anguin/Photographer
Minister of Tourism Edmund Bartlett greets passengers who arrived on the inaugural Edelweiss Air flight from Zurich, Switzerland, at the Sangster International Airport in Montego Bay on Monday.

Jamaica is poised to welcome more than 300 travel agents and tour operators for the upcoming Jamaica Product Exchange (JAPEX) and the Jamaica Bridal Expo, which will be staged back-to-back at the Montego Bay Convention Centre in September.

Both events are among the two most important business exchanges for Jamaica’s tourism industry, with JAPEX set to be the first face-to-face trade show for the sector since COVID-19 locked the country’s borders.

Director of Tourism Donovan White announced both hybrid events during an inauguration ceremony for the Edelweiss flight out of Zurich, Switzerland, at the Sangster International Airport, Montego Bay, Monday night.

Both events were staged virtually in 2020, and but reportedly did not have the same impact as the in-person shows.

The events will be staged from September 20-22.

According to White, the Jamaica Tourist Board (JTB) has been actively bringing groups of five to 10 travel agents to the island since January this year.

In 2019, less than 10 per cent of visitors who vacationed here came for destination weddings, and honeymoon statistics gleaned from the JTB show. However, worldwide, that the market is a billion-dollar treasure trove in tourism-dependent nations.

“Couples are not only spending as they would on a vacation for transportation, tours, and a resort stay, but they are spending money in the local economy to support entrepreneurs such as wedding planners, photographers, DJs, and make-up artists,” said Jennifer Borgh of the Borghinvilla wedding venue.

In the United States market alone, some 340,000 destination weddings take place every year, accounting for US$16 billion in annual spending.

In the case of JAPEX, Jamaica Hotel and Tourist Association President Clifton Reader was excited about the prospects of having several agents and tour operators getting a chance to experience the product after such a long hiatus.

He noted that a concrete decision is expected to be made this Thursday when his group meets with the JTB.

“Having those who sell our product on the island will give them the impetus to sell us,” he stated, adding that safety was extremely important.

Reader described the current windfall, which has seen Sangster International Airport numbers move from 30 per cent in June 2020 to 70 per cent currently, as pent-up demand.

“In the midst of this, we must not forget our travel agents and our tour operators, because they are the backbone of the industry,” he said.