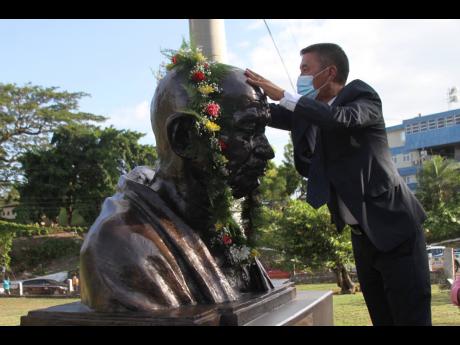 Nathaniel Stewart/Photographer
Rungsung Masakui, India’s high commissioner to Jamaica, participates in the unveiling of a bust of Mahatma Gandhi in May Pen, Clarendon, on Wednesday.

Members of Clarendon’s Indian community have expressed enthusiasm at the erection of a bust honouring Mahatma Gandhi at the May Pen Parish Library on Wednesday.

The installation was in commemoration of the 150th birth of Gandhi, a political activist who led a successful campaign of non-violence for India’s independence from British rule and inspired global civil and freedom rights movements across the world.

Dr Horace Charoo, of Vere in southern Clarendon, home of the Hussay (or Hosay) Festival, said he hopes the site will serve to revive interest in the parish’s Indian heritage.

The erection of the bust was a long dream for Indo-Jamaicans.

“We as Indian descendants in Jamaica were always anxious that we could commemorate the legacy of the icon of the great Mahatma Gandhi.

“Mahatma Gandhi was a forerunner of many of those who fought against the British rule in various countries across the world,” Charoo said.

Charoo told The Gleaner that plans are under way for an Indo-Jamaican Museum at the library in Race Course.

“We are trying to preserve the artefacts of the Indian culture, whether it be jewellery, instruments, books, films, or whatever. What we have found is that as a generation dies out, the artefacts that are remaining in families are getting scattered and lost,” he said.

Keith Sunnanon said he is happy to see a bust of his hero in his home parish.

“I even have a $50 note from India with Mahatma, which I always treasure,” Sunnanon quipped.

Sunnaon, who hails from Kemps Hill in Vere, said he keeps the Indian culture alive by carrying on his father’s trade – building hussays (monuments that house dolls representing two dead brothers) – for the Hussay Festival held annually in August.

“I love it so much so I keep the tradition going and to keep my Indian community happy, and with Mahatma in May Pen, it means so much to us as Indians,” he said.

With the COVID-19 pandemic disrupting plans last year, the Indian community is hoping to host the annual Hussay Festival this August.