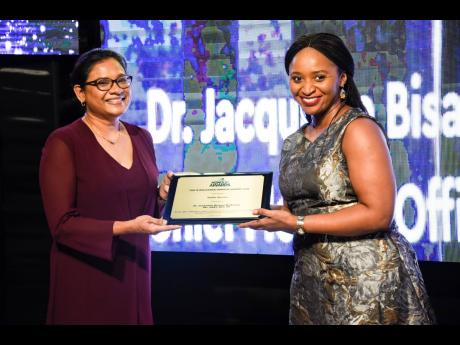 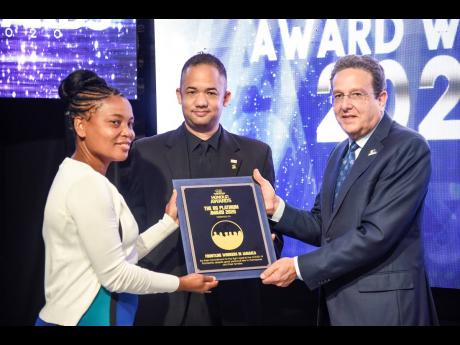 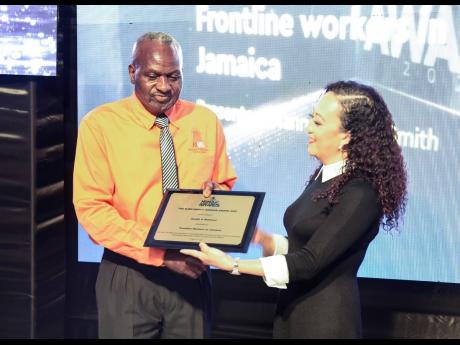 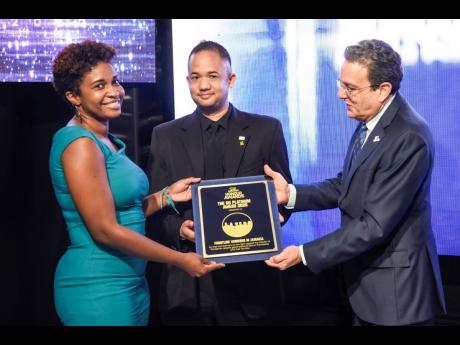 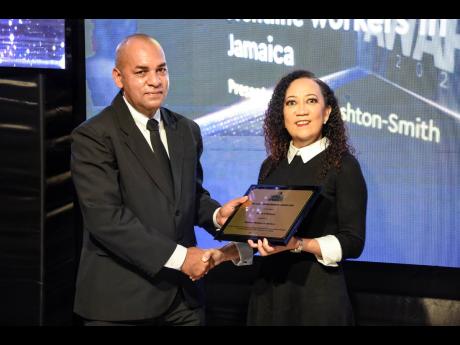 Nicholas Nunes/Photographer
Inspector Steven Watson of the Public Safety and Traffic Enforcement Branch of the Jamaica Constabulary Force, is presented with the RJRGLEANER Platinum Award by Dianne Ashton-Smith, head of corporate affairs at Red Stripe. 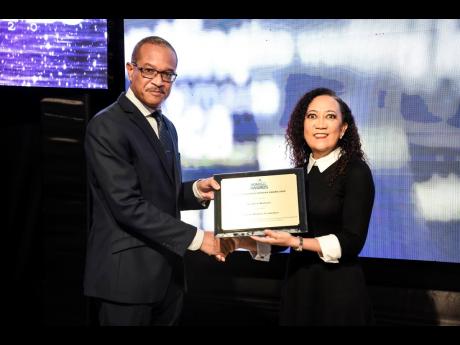 Nicholas Nunes/Photographer
Captain David Chin-Fong of the Jamaica Defence Force, commander of the Support Brigade, is presented with the RJRGLEANER Platinum Award by Dianne Ashton-Smith, head of corporate affairs at Red Stripe.
1
2
3
4
5
6

Jamaica’s Chief Medical Officer (CMO) Jacquiline Bisasor-McKenzie and the cadre of workers on front-line duties during the 16-month fight against the spread of COVID-19 were the big winners at Thursday night’s RJRGLEANER Honour Awards Ceremony.

The two were part of a group of five awardees, which, according to the RJRGLEANER Communications Group, represented the most poignant examples of the island’s resilience under challenging and extraordinary circumstances.

The awardees were in the categories of Business, Voluntary Service, Public Service, Health and Wellness, and Education.

The group of front-line workers, which had earlier picked up the Health and Wellness category award, was earning the RJRGLEANER Group’s most prestigious award for commitment to the COVID-19 fight, placing members and their families at risk.

The CMO, who had earlier won the Public Service category award, was presented with the Red Stripe Stand Up Award, with head of corporate affairs, Dianne Ashton-Smith, saying Bisasor-McKenzie, in an “unflappable” manner, had demonstrated exceptional leadership in the face of immense challenges.

“We are absolutely proud of the work that you have been doing. You are a hero in our eyes. We laud that work in these unprecedented times,” said Ashton-Smith.

Bisasor-McKenzie was quick to point out that the award was an honour for teamwork and was secondary to the goal of building a healthy nation.

“The work that we do, really, is not for receiving awards, although it is great to be recognised,” she said.

“It is really the work of everybody in the health sector and our aim is, of course, a healthy population.”

Earlier in the night, the Private Sector Organisation of Jamaica (PSOJ), represented by its president, Keith Duncan, CD, won the award in the Business category, while Taneka McKoy-Phipps, a teacher, copped the Education category prize.

The PSOJ won its award for the efforts produced by its Business Recovery Task Force, which worked closely with the Government of Jamaica on a Business Recovery Plan. That strategy provided a blueprint for surviving extreme conditions similar to the ones thrown up by COVID-19 restrictions. The task force also provided other kinds of support for businesses in the island.

McCoy-Phipps made headlines last year after taking to the streets of inner-city communities to create kerbside classrooms for students who were neither able to attend physical school nor access e-learning platforms from home. Those efforts were seen as not only benefiting at-risk students but also providing a beacon of hope for voluntarism.

Her cries as she passed the gates of those in the inner city – “Education is our transportation out of poverty!” – leave a mark.

Category awards also went to groups, with the Council of Voluntary Social Services, United Way of Jamaica, American Friends of Jamaica, and the PSOJ combining to walk away with the Voluntary Service award.

Those group were awarded for the coordination and execution of the PSOJ COVID-19 Jamaica Response Fund with donors, partners and, ultimately, more than 83,000 beneficiaries islandwide.

While the group, having won the Health and Wellness award for courage and sacrifice in the treatment of COVID-19 patients as well as for the diligence in maintaining COVID-19 protocols countrywide, was the biggest winner of the night. Orane said that all category winners were heroes.

“Our committee was honoured to have played a role in the selection of these outstanding recipients,” he said.

RJRGLEANER CEO Gary Allen agreed with the committee chairman’s comments, adding that he was pleased that the pandemic had not diminished the efforts of Jamaicans.

“We congratulate all of our awardees. We salute you for the work that you did in a pandemic year, when you continued to show that excellence is something that even a pandemic cannot stop,” said Allen.