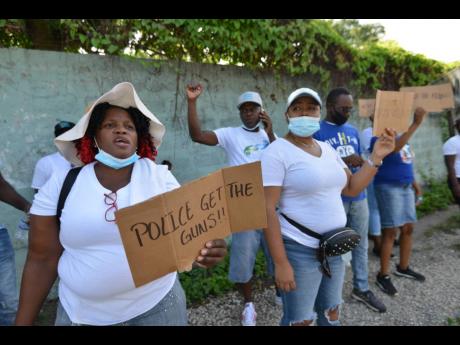 Ricardo Makyn/Chief Photo Editor
Residents of August Town, Hermitage, and surrounding communities stage a peaceful protest along Mona Road in the vicinity of Princess Alice Way on Sunday. The Hermitage Women for Peace, in collaboration with August Town Peace Builders and the Sizzla Youth Foundation, had originally planned a peace march through several communities but it was called off because of security concerns. 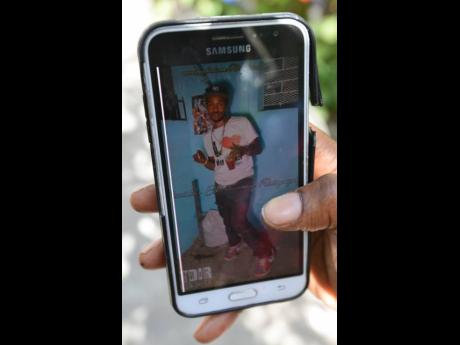 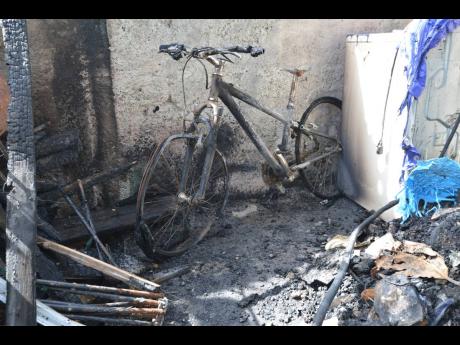 Ricardo Makyn/Chief Photo Editor
A house in Goldsmith Villa where Dadrian Shaye was killed and burnt in his house early Sunday morning.
1
2
3

Deadly gun violence that erupted in Hermitage, St Andrew, on the weekend, has driven fear into a grieving family and forced the abandonment of a peace march in August Town.

Dadrian Shaye, 33, was reportedly shot in the head and his one-room wooden house, located about 60 metres from a zone of special operations (ZOSO) checkpoint, set ablaze early Sunday morning.

One of Shaye's uncles, who goes by the name David, theorised that the barbaric attack that led to his nephew's demise was a reprisal for another killing that occurred in the area on Friday night.

In Friday's incident that occurred about 11:15 p.m., Andre Antonio Perkins, also 33, was gunned down along the Goldsmith Villa main road near a cookshop in the community.

Reports from the police are that Perkins had gone to the area to visit a female friend when he was attacked on his return to his black Mitsubishi Outlander SUV that was parked near the premises he visited.

Perkins was shot multiple times and pronounced dead at the hospital.

Two other persons, including a 64-year-old man, were also shot and wounded in the attack. Both are recovering in hospital.

“Mi a seh a this the youth dem tek fi reprisal on Dadrian, because dem want to paint a picture by killing a youth who go around and help out everybody in the community, so dem always pick on the weaker vessel to get to the strong one,” David alleged.

Shaye's mother, Yvette Blair, is no stranger to tragedy. Three years ago, she lost a pregnant daughter who was shot and killed along Maxfield Avenue in Kingston.

Blair said that she and other family members are anxiously trying to make sense of the attack on her son, who she claimed was no troublemaker.

“Mi can't live with this. Why dem have to burn him body and burn down him house? Even if they killed him, they didn't have to burn him. Why! God, why?” the weeping mother said.

Blair said that Shaye, who reportedly had psychological challenges, was planning to visit her on Sunday.

Meanwhile, chairperson for the Hermitage Women for Peace march, Linnybeth Henry, said that she was disappointed at the cancellation of the march, but pledged more activism to reinforce the message of non-violence.

Inspector Stephen Taylor of the St Andrew Central Police Division told The Gleaner that the march was called off because of security concerns over the two murders in less than 48 hours.

“It would be unwise to green-light any gathering in these communities in light of the ongoing tension,” he said.

Taylor said the police were conducting investigations to determine if Sunday's act was linked to Friday's killing.

The peace marchers were undaunted by the change of plans, opting to mount a protest at the intersection of Princess Alice Way and Hermitage Road. Displaying placards, they chanted, “We want peace in our communities.”

The march was scheduled to be staged in four communities in the St Andrew Central Police Division, including August Town and Hermitage.