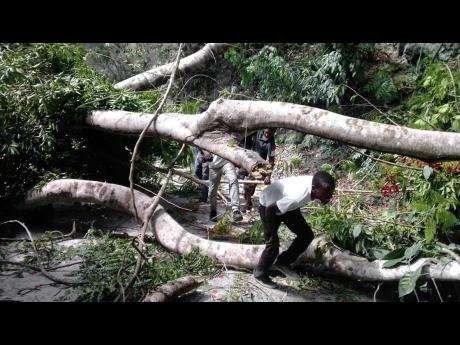 Photo by Hopeton Bucknor
A man avoids a felled tree along a road in St James on Monday as protesters set up blockades with boulders and branches to pressure their political representatives to repair deplorable roads. 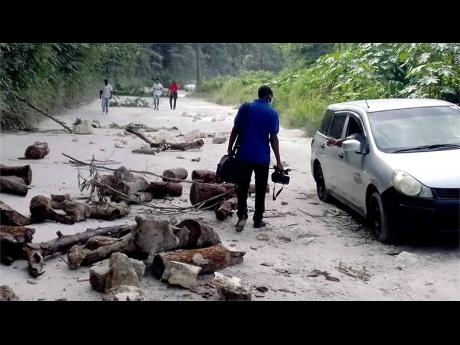 Photo by Hopeton Bucknor
Protesters turned roads in St James into an obstacle course on Monday as they stepped up their lobby for action from Members of Parliament Edmund Bartlett and Marlene Malahoo Forte.
1
2

Deploying branches and boulders and seething with rage, protesters transformed the John’s Hall and Spring Mount roads in St James into an obstacle course on Monday, forcing police and soldiers to patrol the corridor as work crews cleared the thoroughfare of the debris.

From as early as 6 a.m., more than 100 disgruntled residents from John’s Hall, Black Shop, St John’s, Dam Road, Hurlock, Spring Mount and other communities united in a rare mass protest as they demanded that the deplorable roads be repaired.

The residents blocked all the major access points to the communities, including the main stretch leading from Montego Bay, through to Tucker, John’s Hall, Spring Mount, and on to St Elizabeth, resulting in hundreds of commuters being left stranded.

Bus and taxi operators also withdrew their services from routes spanning 15 miles in solidarity with the protesters.

The roadway was littered with boulders, tree trunks, tyres, furniture, and dysfunctional appliances.

Rage was also directed to Marlene Malahoo Forte, the second-term MP for St James West Central who is also the attorney general.

One protester charged that road repairs from Fairfield to Tucker were a political ploy, claiming that the works were stopped because local government elections – a traditional sweetener for voters – will not be held this year.

Besides the lament about potholes, residents also raised concern about a dust nuisance emanating from unpaved roads. They said that their health was at risk and that dust covered their furniture and motor vehicles.

Tina Angling said that the water in storage tanks had been contaminated by dust. She also said that her three children, as well as others in the community, had presented with troubling symptoms linked to the inhalation of dust.

Commuters said that they have become easy targets for marauding criminals.

“Di road so bad that the gunman dem stand up at sections o’ di road weh dem know seh you haffi come to an almost dead stop, and then them jook we dung an’ rob we a night-time,” said a motorist.

“We tired o’ it. We tired fi a buy car parts and a pay gunman every dime what we make a daytime.”