Say a prayer for Baby Shavian 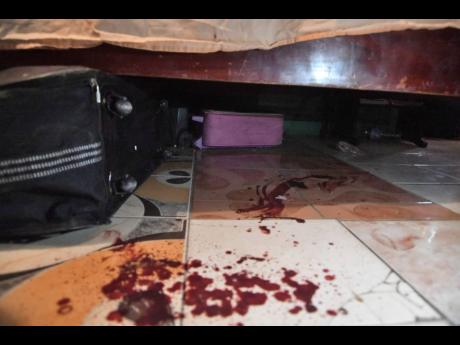 Rudolph Brown/Photographer
The blood-stained floor under the bed where Sherray Barr and her six-month-old daughter sought refuge during a gun attack on Sunlight Street on Sunday. The infant was shot in the head. 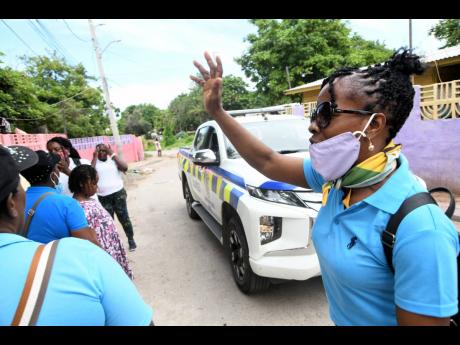 Rudolph Brown/Photographer
below: A woman prays on Monday for a family that came under a gun attack on Sunlight Street, Kingston 13, on Sunday. A baby was shot in the head.
1
2

Always wary of living in penetrable board houses during upsurges in gun violence, Sherray Barr and her infant child had sought refuge away from their Sunlight Street, Kingston 13, home that is in the cross hairs of gang violence.

Barr and the child only returned to their home on Sunday to be close to the Maxfield Park Health Centre for her six-month-old daughter’s appointment Monday morning.

That decision had tragic consequences, Barr must have thought, as she rushed to the emergency room at Kingston Public Hospital moments after men with high-powered guns sprayed a house full of women in a late-night attack on Sunday.

Baby Shavian Thomas was struck in the head by a bullet.

Even as Barr sought to emerge from the house to seek medical attention, she had to get flat again as the assailants pumped more rounds into the house.

It was three agonisingly long minutes before the gunfire subsided again.

“When mi under di bed, mi hear the shot literally lick pon di board and mi hear mi baby scream out, and when mi look, mi see blood a run off her head,” a tearful Barr told The Gleaner.

“It sad, but God have her in His hands. Mi leave everything inna God hands. All vengeance, everything a Him a go tek care of it.”

The entire onslaught lasted around 10 minutes.

Barr recalled, on hearing gunfire outside, grabbing her baby and cramming under a bed: the only safe spot she could find. But it wasn’t safe enough.

Bullet holes from floor to ceiling

She recalls having always feared the fragility of board homes because of the volatility that stalks communities along Maxfield Avenue and the deadly firepower wielded by gangsters.

The gunmen reportedly cornered three homes strategically as they unleashed terror in the pitch blackness of night on Sunday.

The blood-soaked house was a poignant reminder of the trauma that unfolded, with bullet holes from floor to ceiling, a pool of blood under the bed, and dead pets on the veranda.

“Three baby rabbits dead. Gunshot buss dem up, head one side and body deh one side. The plantain dem, all food di man dem shoot up ... ,” an elderly resident said.

“The shot weh lick the roof is rifle shot because the entire house shake. Oh, my God!”

Barr said she believes the attack was targeted.

The young mother is praying that Shavian recovers from the gunshot wound.

“I know God gonna pull through my baby for me,” said Barr, who lost her first child in 2020.

Sunlight Street has had sporadic gunfire and killings in recent months since the collapse of a truce brokered by rival factions.

Up to July 7, the Kingston West Police Division has seen a 17 per cent increase in murders year to date, from 53 to 62.