Millions in pauper burial fees owed for years by Government 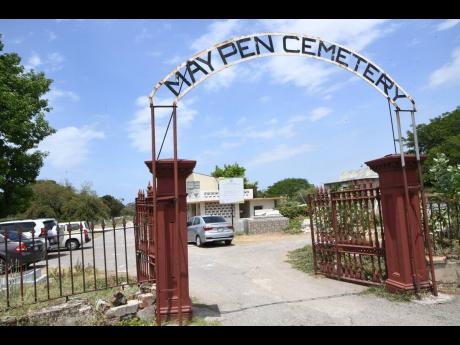 Rudolph Brown/Photographer
The May Pen Cemetery in Kingston. Funeral home contractors say outstanding payments from the Government date as far back as 2017.

Funeral home operators contracted by the Government to carry out pauper burials say they are owed in excess of $25 million, but the Institute of Forensic Science and Legal Medicine (IFSLM), which has been fingered for blame, says that funding is not within its mandate.

The contractors say the outstanding payments date as far back as 2017.

Director of Lyn’s Funeral Home, Calvin Lyn, said he has been having issues securing payment for unclaimed remains for the last three years. Like others in the business, his patience is wearing thin.

Lyn said that he was aware of at least eight other contractors who are owed.

“It is unacceptable that we perform these duties and they take so long to pay us,” he told The Gleaner in an interview.

Lyn said that the contractors are responsible for transporting, storing, and burying those who are unclaimed by relatives based on an agreement they have with the IFSLM, an agency of the Ministry of National Security (MNS).

These bodies, he said, are stored at the expense of the funeral homes for months before they are given clearance for burial. Storage is heavily discounted, with the Government required to pay as little as 25 per cent of routine charges.

Telbert Roberts, a director at Roberts Funeral Home, told The Gleaner that the Jamaica Constabulary Force was initially responsible for making payments to its office but stated that he learnt that obligations had been shifted to the IFSLM.

“Whatever you are owed, it’s like you have to write it off because nobody is going to pay you,” he lamented.

Jacqueline Morgan, a director at Morgans Funeral Home, said that the Ministry of National Security has changed the agency responsible for burial payouts at least three times. She reported being owed in excess of $10 million.

Morgan explained that her funeral home had responded to a tender offer for pauper burials and unclaimed cases. She said that the last contract had been signed with the IFSLM.

The funeral home operator said that there has been no addendum to the contract to indicate that she and others should secure compensation from another agency.

“From this new contract, we have been getting a lot of variables of what the Forensic Institute is to pay for and what is their mandate,” Morgan told this newspaper.

Undertaking such burials has become even more expensive since COVID-19 as funeral homes have had to source protective gear for workers.

Director of the IFSLM, Dr Judith Henry-Mowatt, said that pauper burials are not part of the agency’s portfolio responsibility and that contractors have been informed.

“Our mission and mandate is scientific examinations and analysis of forensic evidence, conducting the post-mortem to determine cause, manner, and mechanism of death. We don’t bury paupers,” Mowatt said.

The funeral operators, she noted, are only contracted to transport and store bodies to be brought for post-mortem.

“Once the post-mortems are concluded, we pay them up to that point, and if it is that after the post-mortem is done, we have to retain the body for, like, DNA purposes for identification or for X-ray of the bodies, then we pay the storage beyond the post-mortem,” she said.

In a letter from Angela Patterson, the then director of Corporate Services at IFSLM, dated May 19, 2020, contracted funeral homes were informed that efforts were being made to secure funds for outstanding payments.

The subject of the letter, a copy of which was seen by The Gleaner, is ‘Outstanding payments due for paupers burial’. The letter was copied to Henry-Mowatt.

According to the letter, a meeting was convened with the Ministry of Finance, the Ministry of National Security, and the IFSLM to identify funds needed to settle the outstanding amounts for claims made for charges attendant upon paupers’ bodies being held for lengthy periods at their facilities before burial.

“The meeting ended with the decision that the issues which led to the debt require Cabinet’s approval, and so the matter must be tabled there. Note was also made of the savaging of the Budget caused by the COVID pandemic,” the letter said.

The funeral home operators say they are tired of being given the runaround.

“We will be patient for a time, but this is getting out of hand now. Unbearable!” said Lyn.