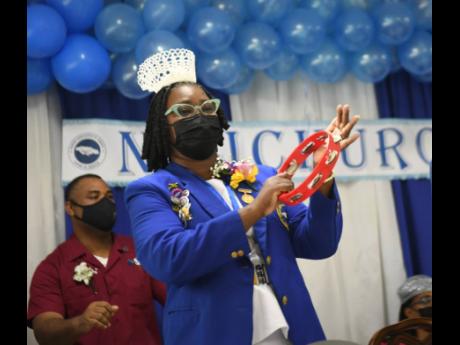 Gladstone Taylor/Multimedia Photo Editor
Patsy Edwards-Henry, president of the Nurses Association of Jamaica, rattles a tambourine during praise and worship at the Nurses Week church service held at Mary Seacole House in Kingston on Sunday.

That stance is likely to become more belligerent in a negotiation season that has seen a record-high nominal drop in the value of the Jamaican dollar against the greenback and steep price rises for many goods and services on the domestic market, mirroring global concern about the cost of commodities.

Speaking with The Gleaner after Sunday’s Nurses Week thanksgiving service at Mary Seacole House in Kingston, Edwards-Henry insisted that top of her union’s agenda was ensuring that all nurses receive a “liveable” wage.

“Written into our proposal are some things that we would want. It includes an increase in the salary of the Basic Level 1 nurse, moving her up to a level that she has a liveable wage, and once that nurse is moved up, then all the other nurses above will be moved up,” the NAJ president said.

Those salary movements represent one of several items that will be placed on the bargaining table.

Other incentives beyond salaries are being considered, but the NAJ is awaiting the findings of an ongoing compensation review before any decisions are made. Negotiations will begin by the end of July.

Edwards-Henry declined to speak on specific offers until the negotiations with the Government are concluded.

Outstanding remuneration for nurses who have participated in recent COVID-19 vaccine blitzes continues to be a sticking point for the NAJ. Edwards-Henry did not reveal the precise number owed.

Citing the effects of the pandemic on nurses and their families, Edwards-Henry also underscored the importance of Jamaicans adhering to coronavirus protocols under the Disaster Risk Management Act.

In March, Health and Wellness Minister Dr Christopher Tufton said that since January, more than 70 nurses at the University Hospital of the West Indies alone had been recruited overseas.

Edwards-Henry said on Sunday that the trend of migration would not abate until compensation is significantly increased.

“The renumeration is so poor. We are the third-lowest-paid Caribbean country, and because of this, nurses leave for a more liveable wage,” she said.