Darby takes reins of a Manchester in transition 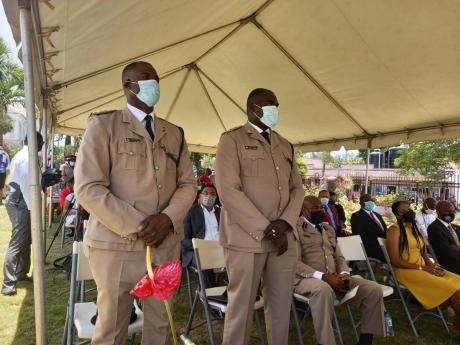 Photo by Tamara Bailey
Superintendent of Police Lloyd Darby (left), new commander of the Manchester Police Division, with his predecessor Gary Francis at the changing-of-the-guard ceremony at the Cecil Charlton Park in Mandeville on Monday.

Leaving a legacy of a 23 per cent reduction in major crimes in 20 months, Superintendent Gary Francis has handed the baton to the Manchester Police Division’s new commanding officer, Superintendent Lloyd Darby, who has been given the charge to further drive down lawlessness in the central Jamaica parish.

At a ceremony for the changing of the guard on Monday, Francis conceded that battling crime during the coronavirus pandemic had become increasingly difficult.

Francis, however, commended his team for recording a 27 per cent reduction in murder.

Other achievements, he said, include a reduction in five of the seven categories of major crimes, among them shootings (28 per cent), rape (66 per cent), break-ins (22 per cent), and robberies (44 per cent).

Francis, who has been transferred to the Police Emergency Communication Centre, said prior to his tenure, the parish had not recorded, for the last decade, two consecutive years of reduction in any of those categories.

While Area Three Assistant Commissioner of Police Michael Smith commended the outgoing commander for his mentorship of staff, Francis’ son Akeem was thrilled at the prospect of having his dad closer to home. (Francis previously served in the St Andrew South Police

“I must extend my gratitude to you all for the all the support and the love you have given him … . On this day, my 15th birthday, the commissioner of police has unknowingly given me one of the best birthday gifts, and that is the transfer of my father from all the way in Manchester to Kingston ... to spend more time with me and my siblings,” Akeem said.

Darby takes the reins of a parish in transition, with a major highway construction development under way that is expected to reshape the fortunes of districts and villages whose sources of revenue are likely to plunge, providing new crime concerns. He also faces the challenge of domestic disputes as a major factor fuelling murders.

With more than 30 years of experience, Darby, a native of Manchester, said he would be placing stronger emphasis on core deliverables such as capacity building, boosting staff morale, improving citizen safety and security, and enhancing professional standards.

“Greater responsibility is on my broad shoulders but I want to assure the citizens of Manchester that team commitment is still in place,” said Darby at Cecil Charlton Park.

“I am calling on the citizens of the parish to help us so that we can regain our footing and have that reduction [in crime] that we all need to make Jamaica a better place,” he said.