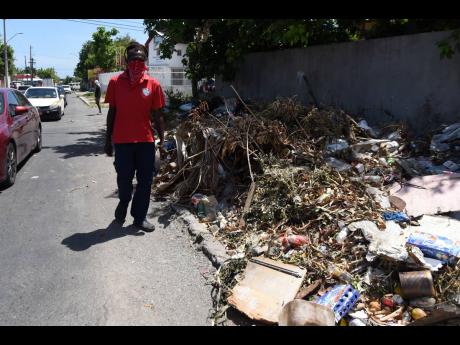 Kenyon Hemans/Photographer
A pedestrian walks near the line of traffic on Monday because a sidewalk along Waltham Park Road, near the intersection of Bowens Road, has been transformed into a dump site. Residents of the St Andrew community have claimed that the National Solid Waste Management Authority has not visited the area for weeks.

Rastafarian Carlton Lewis has just about had it with the garbage pile-up plaguing Whitfield Town, one of Kingston’s blighted communities.

Lewis and other residents of 17 Lane, Kidd Lane and Bowens Road in the Waltham Park and Spanish Town Road areas are complaining about tardy garbage collection and growing public-health concerns.

Lewis is charging that the Government should be ashamed of its stewardship.

He is predicting that there will soon be a bigger problem on the hands of health officials.

“When rat and dem thing deh infest the place, a nuh dem a feel it, a we feel it. Yuh see the people dem bout yah, if yuh find 20 of dem like me, things woulda better. A man weh fi talk the things and stand up for people right,” Lewis said.

Some residents reported not seeing a garbage truck in weeks.

Eugene Kelly, councillor for the Whitfield Town division, said he is aware of the garbage crisis in the communities – particularly the eyesore at the intersection of Bowens Road and Waltham Park Road.

He also blamed drive-by litterbugs for creating a mess in Kingston 13 public spaces.

Just yesterday a motorist was observed driving past and throwing a gallon-size bottle on to the pile.

Kelly said he shares a good relationship with the management at the National Solid Waste Management Authority (NSWMA), whose help he has solicited in procuring receptacles and signs for the community.

The Whitfield Town councillor said the NSWMA has, however, indicated that the signs do not always prove useful.

“They claim that the use of the no-dumping sign is ineffective. I differ, because I believe if you have a sign strongly worded, strong possibility of prosecution of something like that, I think that if you deter two people, then the sign would have been successful,” Kelly said, while deploring enforcement as lacking.

Audley Gordon, executive director at the NSWMA, said that the organisation was facing deployment challenges because large trucks had difficulties manoeuvring along narrow lanes.

Gordon said the agency does not own any small trucks, adding that the NSWMA was forced to rely on contractors that were not always available.

Citing similar difficulties for fire truck operators, Gordon said that the problem was a symptom of poor urban planning.

He pledged, however, to dispatch collectors to the affected sections of Waltham Park Road today.