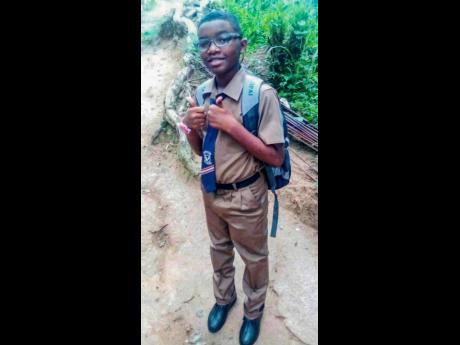 Kahleel Robinson aced his Primary Exit Profile (PEP) examinations and is having the last laugh as he will be attending his school of choice, Wolmer’s Boys, in September.

His parents said he shrugged off years-long ridicule from some students who jeered him about his visual impairment.

The Lawrence Tavern Primary alumnus wears spectacles and cannot see out of one eye.

But the 12-year-old mastered numeracy and literacy and scored high marks in mathematics and language arts. He also featured in the top one per cent in the ability test islandwide.

Kahleel’s mother, Shermaine Williams, told The Gleaner that he has always ranked first or second throughout primary school.

“You know what surprising? From grade one up, children tease him because him wear glasses and then from him born up to now him still nuh have 20/20 vision. ... Children tease him and it nuh trouble him, it only motivates him to continue,” Williams said.

Kahleel is maintaining a family legacy as his older brothers have accomplished excellence in PEP and its precursor, the Grade Six Achievement Test (GSAT).

Jaunte Robinson, now 14, attends Calabar High and was in the top four per cent of entrants in PEP two years ago.

Jordan Robinson, now a Campion College student, was the top math GSAT student in Surrey in 2014. He scored 100 per cent in mathematics, 94 per cent in language arts, 99 per cent in social studies, 97 per cent in science, and 12/12 in communication task.

The boys’ father, Maurice Robinson, is beaming with pride.

“I am so overwhelmed to see my littlest son achieve. He has always done well. I am over-proud. From him a baby mi see the brightness!” said Robinson, who has two other kids at Jamaica College and The University of the West Indies.

Williams said she expected Kahleel to do well because of innate ability, noting that he was a perfectionist, ruing even the slightest slip-up.

“The day of PEP, him come home and say, ‘Mommy, you know mi feel like me get one wrong,’ because he did from number one to 39, but when him reach 40, him say it took him 10 minutes to figure it out, and him feel like him get it wrong,” Kahleel’s mom said.

His former school is proud and Williams said his class teacher is ecstatic and has contacted other parents to share in the jubilation. The boy’s mother said that he wanted to attend Wolmer’s since age four.

“They really and truly wanted him to attend Campion but he really is not a Campion-minded person. Him just love Wolmer’s Boys. On the day of the results, he took like 15 minutes to google the route from Lawrence Tavern to Wolmer’s,” Williams told The Gleaner.

“He researched the principal’s name, the school motto, and all of that. He already knew the colours: maroon and gold.”