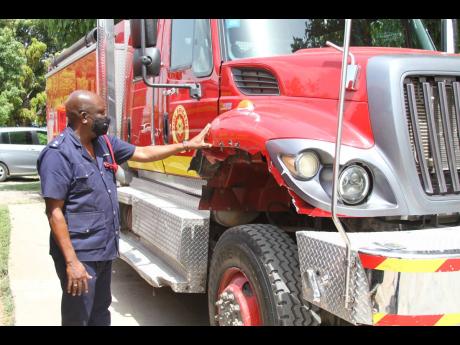 Clarendon’s fire chief has raised alarm about the high incidence of false reports made to the brigade and blamed prank callers for wasting public resources and jeopardising lives.

Citing a unit’s response to false alarm in Douglas Castle in southwest St Ann, acting Deputy Superintendent Dennis Lyon said that the report was routed to firefighters in May Pen, Clarendon, because the St Ann’s Bay and Frankfield units were dysfunctional.

Lyon said that the May Pen fire unit was dispatched to Douglas Castle – a 39-kilometre (24-mile) journey to the fringes of northern Clarendon – only to discover that the report was not genuine.

“On the long trek back, when they reached Reckford, they met in an accident, leaving the parish without a fire unit for a few hours,” the deputy superintendent said.

A wrecker was deployed to transport the truck to Kingston where it was repaired, although more restorative work is still outstanding.

Lyon stressed that prank calls diverted resources and placed the parish at risk of property damage and death if firefighters are unable to intervene quickly.

“You see the dilemma we face when people send in these prank calls, so I am appealing to them to stop, because it could be their house,” said Lyon.

Prank calls are not the only challenge faced by the brigade.

Rugged terrain and crater-filled roads have also taken a toll on fire trucks, significantly lengthening response times. May Pen’s administrative building is also due for refurbishing and dysfunctional hydrants are in need of repair.

Lyon, who took command of the division on June 1, said he has found operations in Clarendon far different from his former posting at York Park in denser Kingston, with reinforcement accessible in nearby Trench Town, Rollington Town, Port Royal, and Half-Way Tree.

The highest aggregate reports collated in the five-year period were the 1,303 recorded in 2018.