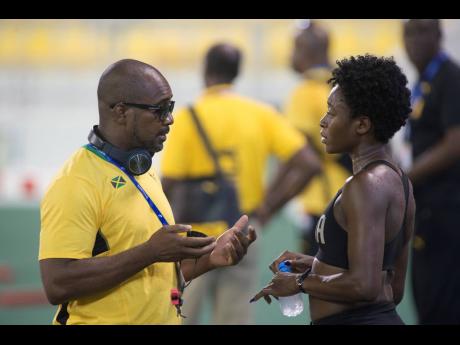 Gladstone Taylor
Coach Okeile Stewart (left) and 400m hurdler Rushell Clayton in discussion during a training session at the Qatar Sports Club ahead of the World Athletics Championships in Doha, Qatar, in September 2019. 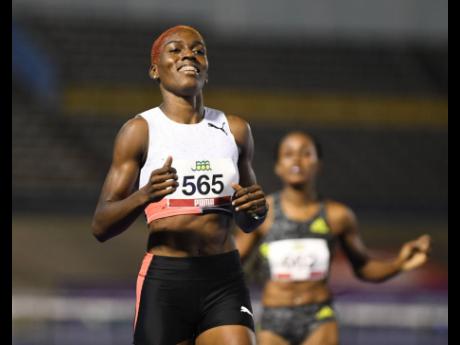 Jamaica’s medal-winning streak in the women’s 400m hurdles could continue in Tokyo when the Olympic track and field programme begins. So says Swept Track Club head coach Okeile Stewart, who coached Rushell Clayton to third place at the 2019 World Athletics Championships. Stewart says that Janieve Russell, the 2018 Commonwealth champion, will shine in Tokyo

Thanks to Ristananna Bailey-Cole and Clayton, Jamaica has won bronze medals at the last two World Championships.

The MVP Track Club hurdler won the National Championships in June with a season’s best of 54.07 seconds, ahead of 2019 Central American and Caribbean Games champion Ronda Whyte, and Russell’s fellow 2016 Olympic finalist Leah Nugent. Russell, 27 years old, improved to 53.68s in Hungary on July 3. That’s not far from her personal best of 53.46s. However, four women, led by world record holder Sydney McLaughlin, have broken 53s this year.

“I watched the 53s that she ran recently and it’s quite motivating for me, knowing that she’ll be there representing the country. And I also looked at Whyte, the last 54s that she ran, it was very composed, and I believe that once those girls go there with confidence, they will represent well,” Stewart said. “However, I wouldn’t leave out a Leah Nugent, who has been to a final before and is making her way back.”

Russell goes to Tokyo as the sixth-fastest woman of the season, and fifth among those who will compete at the Games. Whyte and Nugent are the 11th- and 18th-fastest, respectively, with clockings of 54.33s and 54.98s.

A medal for Russell would be Jamaica’s first in an Olympic Games since Melaine Walker triumphed in 2008.

Injury, however, made it impossible for Clayton to fight for a place on the Jamaican team, and Stewart says his charge is hugely disappointed. Instead of being in Tokyo, she will be watching her training partners Jaheel Hyde and 100m sprinter Tyquendo Tracey with keen interest.

“Bittersweet, you know,” Stewart said. “Rushell is a warrior and she would have really wanted to be there, too, knowing that she and Jaheel, they share the same management team and they are very close in training.

“Irrespective of that, she is motivated. She is looking forward for what can be salvaged at the end of the season, and she’s cheering her teammates on.”