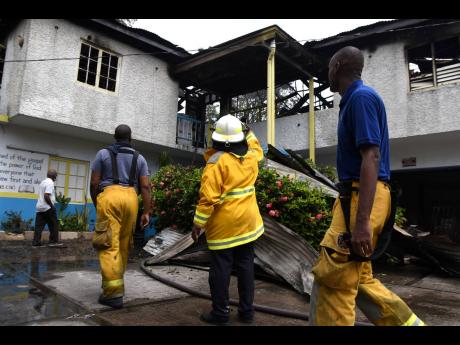 Kenyon Hemans
Fire completely destroyed a building that housed the administrative offices at the Hydel Group of Schools along Mandela Highway in St Catherine yesterday morning, resulting in millions of dollars in damages.

Fire of unknown origin completely destroyed a building that housed the administrative offices at the Hydel Group of Schools along Mandela Highway in St Catherine yesterday morning, just before the start of external examinations. There were no reports of injuries.

With initial estimates of over $50 million in damages, the fire started just after 7 a.m. and quickly engulfed the building, but not before some members of staff were able to save some of the filing cabinets that contained sensitive information.

Vice-president of the group of schools, Corey Bennett, told The Gleaner that computers, laptops, audio visual and communication aids as well as office supplies and equipments were destroyed in the blaze.

“This is the centre of the school; however, we were able to save the majority of files and relocate to another office so we could prepare for the students who had exams,” Bennett disclosed.

“We are extremely thankful that no students were on the compound when the fire started. Those who came in later to sit their CXC were able to do so without any difficulty because we were able to keep our heads.”

Bennett continued, “The damage is extensive and will run into millions of dollars, but even with this preliminary estimates, a full picture of the loss incurred from the fire has not yet been ascertained.”

The vice-president said that the destruction to the building could not come at a more difficult time - when the school was conducting external examinations. He stated that the rebuilding process will be challenging.

“We are appealing to corporate Jamaica in this time of need, any kind of help that can be offered, whether material or otherwise, to the school, will be welcome,” he said.

“We were able to contain the fire and prevent it from spreading to other buildings on the compound because of our response capacity,” he noted.

“At the moment, we are assessing the risks associated with the fire; however, we have placed the preliminary estimates for the damage at $50 million,” Powell revealed while quick to point out that this figure could escalate when the investigations are completed.

He said over 35 fire fighters with seven units, one ambulance, and a team of first responders drawn from Spanish Town, York Park, Trench Town, and Portmore responded to the blaze.