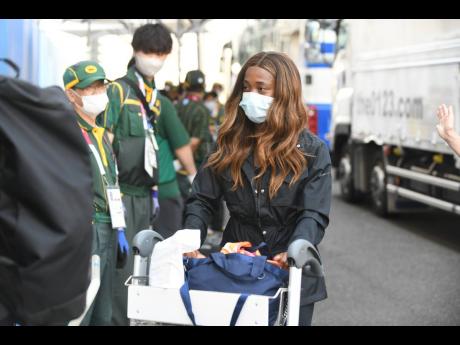 Gladstone Taylor/Multimedia Photo Editor
World champion and national record holder Shelly-Ann Fraser-Pryce is among the contingent of Jamaican athletes and coaches that arrived at the Olympic Village in Tokyo, Japan yesterday. The opening ceremony for the Tokyo Olympic Games is scheduled for today at the New National Stadium.

The world record in the women’s sprint relay could fall to Jamaica in the upcoming Olympic Games. That expert opinion comes from 2004 Olympic 4x100 gold medallist Sherone Simpson. She believes Jamaica’s top four women – Shelly-Ann Fraser-Pryce, Elaine Thompson-Herah, Shericka Jackson and Briana Williams – are faster than the USA quartet that set the record nine years ago.

Asked whether Jamaica could break the record, Simpson replied in the affirmative.

“This is the time for Jamaica to get that world record in the 4x100 relay. This is the time. We have the ladies. Once we’re able to practise, I think yes,” she explained about Fraser-Pryce, Thompson-Herah, Jackson and Williams who produced times of 10.71, 10.82, 10.84 and 11.01 seconds, respectively, in the final of the 100 metres at last month’s National Championships.

“That is why I’m a little disappointed that there will not be a camp,” she added, “but I trust the ladies to go out there and to get that world record.”

Jamaica’s camp in Japan was cancelled due to concerns regarding the spread of COVID-19.

“The times are there,” Simpson itemised, “but I just want them to practise. With the US, they practise a lot and they have the right persons on each leg, so once we’re able to put the team together and to get some baton exchanges, I think, yes, not think, I know we can go out there with God’s help to get that world record.”

Asked to arrange the team in running order, Simpson said, “My suggestion would be Briana to Shelly-Ann to Elaine to Shericka. Briana would be at the start, which I think is perfect for her, and all the other ladies, they have ran on those legs.”

She’s right. Fraser-Pryce was on second-leg duty on World Championships winning quartets in 2009 and 2019, while Thompson-Herah ran the third leg when Jamaica won the 2015 World title. Jackson ran the anchor leg on the 2019 World Champion team.

The 2015 team of Veronica Campbell-Brown, Natasha Morrison, who has run 10.87 seconds this year, Thompson-Herah and Fraser-Pryce holds the Jamaican record of 41.07 seconds. Only the USA has ever run faster.