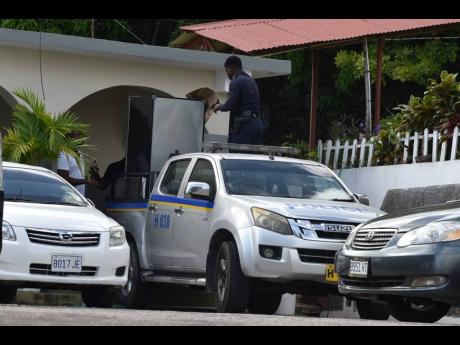 Mark Titus
On Friday, police officers were seen removing furniture from the Teamwork Retreat Centre in St James, reportedly en route to the nearby Freeport Police Station for storage. Some 50 policemen assigned to the Zone of Special Operations in the parish were, up to yesterday, scampering to find accommodation after the government terminated the contract with the property owners. 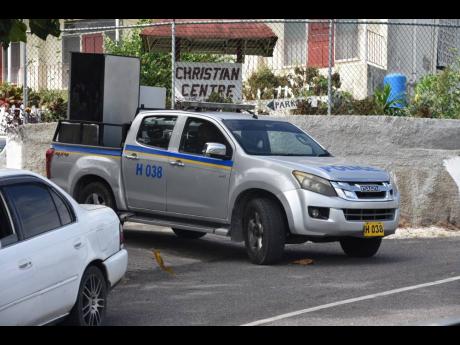 Mark Titus
Photos by Mark Titus On Friday, police officers were seen removing furniture from the Teamwork Retreat Centre in St James, reportedly en route to the nearby Freeport Police Station for storage. Some 50 policemen assigned to the Zone of Special Operations in the parish were, up to yesterday, scampering to find accommodation after they were ordered out of the premises.
1
2

Some 50 policemen assigned to the Zone of Special Operations (ZOSO) in St James were, up to yesterday, scampering to find accommodation – some in the very communities they have raided and engaged criminals in gun battles – after the Jamaica...

Some 50 policemen assigned to the Zone of Special Operations (ZOSO) in St James were, up to yesterday, scampering to find accommodation – some in the very communities they have raided and engaged criminals in gun battles – after the Jamaica Constabulary Force (JCF) reportedly ordered them out of the Teamwork Retreat Centre in the parish where they were being housed for years.

The Sunday Gleaner has learned that the officers, mostly fresh from training school and who live as far away as the Corporate Area, St Catherine and St Thomas, were given orders to evacuate the premises two Wednesdays ago, and since then some have been shacking up with relatives, friends, and female acquaintances they have made while posted in the island’s deadliest parish.

It appears no alternative arrangements were made for their accommodation, even as The Sunday Gleaner witnessed pieces of furniture provided by the JCF for the policemen to use being wheeled out of the premises on Friday, reportedly en route to the nearby Freeport Police Station for storage.

Friday, “eviction-day”, was the most difficult, according to the law enforcers, some of whom worried where they would sleep as they worked extended shifts in the unpredictable St James SOZO areas of Mount Salem and Norwood. Still, those cops most desperate and with nowhere to go were still at the hotel up to yesterday.

The policemen ordered to leave are reportedly those on temporary transfer from Kingston to support anti-crime operations in St James. Each officer was being paid a housing allowance subsidy for rent/mortgage, but after being permanently transferred to St James recently, they are now expected to find their own private accommodation. However, for some officers, the notice given was too short.

“Last week Wednesday, the corporal in charge of us read an email sent from Area One police headquarters. It said we have until Friday to leave. We are saying that is too short notice. Couldn’t they have given us a month to find somewhere?” argued one constable, who said he has been shacking up with a woman since Thursday night.

He and others are “sitting ducks” in some of the volatile St James communities, he feared.

“Even now police just have to be rushing all over the place. Some police don’t even find anywhere to live as yet. Nobody has come to hear about our concerns, they are just throwing us out. Some cops are stressed out and frustrated but we can’t do anything,” he said.

“If they knew they were going to kick us out, why didn’t they say something earlier? Couldn’t they have given us a little more time? None of us are from down here; they sent us down here to work, so they are responsible for providing us with accommodation, but now we have been thrown out on the street with nowhere to go.”

Inside the Teamwork Retreat Centre parking lot on Friday, lawmen gathered, some worried-faced or attired for the day’s duty, while a few somehow found humour in their predicament. They scurried away when they saw The Sunday Gleaner news team, for fear of being photographed.

Two policemen were seen lifting a refrigerator and other appliances into the back of a police service vehicle.

“They are taking all that belongs to the government to Freeport (police station),” said one cop, obviously distressed as he too had not yet found anywhere to stay.

“I have to report for duty, and still I don’t know where I am going to go. I hope I hear something positive afterward but for me, the clock is ticking.”

Up to Friday afternoon, president of the Jamaica Police Federation Corporal Rohan James said he was still in discussions with the police commissioner about the fate of the policemen.

“I am aware of the fact that the JCF is relinquishing a contract with private premises and consequently, it may require us to treat with the facilitation of our members elsewhere,” James told The Sunday Gleaner at the time. “It is being addressed and it is hoped that the arrangements will be made for the members to be housed at Freeport. I am in discussions with the commissioner but it is something that is being actively pursued,” he said, declining to speak further on the matter until discussions were completed.

Also elusive was Dr Winsome Oban, managing director of the Teamwork Retreat Centre, who, when asked about the situation, offered only: “They (police) have not been evicted, but I cannot talk on behalf of the police”. Oban noted that there was no bad blood between the facility’s management and the JCF, however.

PREFERENCE GIVEN TO YOUNG OFFICERS

On Friday afternoon, ACP Clifford Chambers, head of Area One, told The Sunday Gleaner that efforts were being made to help find accommodation for the men. He could not say, however, why the policemen were not given a longer notice or why arrangements were not put in place for their housing before the order to move out.

“We are helping them to find suitable accommodation but the speed of finding the accommodation might not go as quickly as we would like. The commander of St James is now making arrangements for those who have not readily found any location,” he said, noting that no accommodation was being made for them at the Freeport Police Station.

He said preference must be given to young officers, however.

Chambers also pointed out that, “Teamwork belongs to us (JCF) just the same. We have more than 50 persons working in the ZOSO who are from all over the island. They have not been officially transferred to St James so they have to be accommodated at Teamwork. Once they are officially transferred via force orders and start to receive a housing allowance, it means they will have to find their own accommodation.”