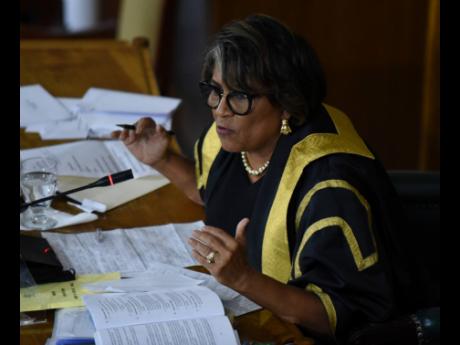 HOUSE SPEAKER Marisa Dalrymple Philibert remains in legal hot water as the General Legal Council (GLC) – the regulatory body for the legal profession – continues to probe allegations of professional misconduct made against the prominent attorney...

HOUSE SPEAKER Marisa Dalrymple Philibert remains in legal hot water as the General Legal Council (GLC) – the regulatory body for the legal profession – continues to probe allegations of professional misconduct made against the prominent attorney over her handling of a client’s estate more than 20 years ago.

The original complaint was filed by Sandra Clarke and Richard Clarke in November 1995. The surviving relatives of one of the attorney’s deceased clients are claiming that Dalrymple (who was not married at the time) failed to account for “all monies in her hand for the credit of the estate of Clinton Clarke although she has been reasonably required”.

They are also seeking an explanation for the sale of a property at 92 Barnett Street in Montego Bay, St James, by a dead Ermine Clarke (Clinton Clarke’s second wife). The property was reportedly sold in 1996 after Mrs Clarke died on October 15, 1994.

The claimants are seeking compensation in the order of J$100 million, including legal fees for a battery of at least seven lawyers.

Dalrymple, who faces the possibility of a fine, disbarment and/or an order to make restitution if found guilty, has strongly refuted the allegations.

However, after dismissing the case in February 1997 without hearing testimony from either party in the complaint, the GLC reopened the matter 16 years later in 2013 after the main complainant submitted an ‘updated’ affidavit on March 11 of that year.

The Disciplinary Committee (DC) of the GLC, in a letter dated March 10, 2014, informed Richard Clarke that his complaint was considered at its meeting on February 22 and “the decision was taken that the matter should be set for trial.

“As soon as a date for hearing is fixed you will be notified,” added the letter signed by Dahlia Davis, secretary of the GLC.

Since then, there have been no fewer than 20 dates set for hearings but no settlement has been forthcoming, and the case continues to drag on and on, with no end in sight.

A meeting of the DC of the GLC that was scheduled for last Thursday to consider the matter had to be aborted due to the unavailability of lawyers for the complainant who had previously appealed to several bodies and individuals, including the National Integrity Action, Major Organised Crime and Anti-Corruption Agency (MOCA), Jamaicans for Justice (JFJ), the Jamaica Constabulary Force (JCF) and then Opposition Leader Andrew Holness for support in the legal fight.

HOLNESS DECLINED TO GET INVOLVED

In a January 29, 2015 reply to Richard Clarke, Holness declined to get involved, saying he reserved comment on the issue, given that it was still before the GLC and other investigative bodies. MOCA and JFJ had also acknowledged receipt of Clarke’s correspondence, while the JCF reported three years later on June 26, 2018, in correspondence under the signature of Assistant Police Commissioner Fitz Bailey, that “a comprehensive investigation was done and the file submitted to the Office of the Director of Public Prosecutions (DPP) for advice”.

This led to the April 9, 2018 letter from the Office of the DPP in which it advised that, “there is insufficient evidence to support a criminal prosecution”.

Dalrymple’s attorneys Samuda and Johnson had also written on April 7, 2016 to Richard Clarke’s lawyer at the time, Clayton Morgan, suggesting a settlement.

However, after the complainant itemised $85 million in costs on April 22, 2016, the defendant filed for dismissal of the matter.

On October 4, 2018, the claimant submitted a 73-point affidavit to the GLC alleging, among other things, that the family, on numerous occasions, requested the file of the estate from Dalrymple but it was not forthcoming.

He also charged that while the GLC was seeking to determine whether it would hear the initial complaint, the sale of one of the disputed properties took place.

Richard Clarke also submitted a 60-point complaint chronology in which he stated that Dalrymple failed to account for “all monies in her hand for the credit of the estate of Clinton Clarke although she has been reasonably required”.

He further charged her with failure to provide the complainant with information as to the conduct of their business despite being required to do so.

The claimant also sought explanation for the sale of Barnett Street by the deceased Ermine Clarke.

It was pointed out to the GLC that on February 7, 1997, Dalrymple wrote to the Registrar of Titles saying that the title for the Barnett Street property was lost. She later took out media advertisements in THE STAR newspaper giving notice that at the expiration of 14 days, she would register a new title in the name of Ermine Clarke who had died three years earlier.

Among a large volume of correspondence reviewed by The Sunday Gleaner was an undated, draft letter outlining Ermine Clarke’s intention to sell 92 Barnett Street to a Sherold Philibert, a businessman of Runaway Bay in St Ann. It is not clear if the businessman is related to Dalrymple Philibert. However, the draft was signed in the presence of a notary public of New York in 1995 (after Mrs Clarke’s death) and carried a 1995 official stamp, but the signature of the notary was not discernible.

The agreement listed Clarke’s US address where she resided until her death in 1994.

In Dalrymple’s 1995 affidavit, she said it was Mrs Clarke who brought Philibert to her office.

In the meantime, lawyers for the embattled House Speaker have taken issue with the length of time it has been taking to bring the matter to a settlement.

In their amended notice to dismiss, dated June 29, 2017, they said “the delay will deny or deprive the applicant of a fair hearing/trial”.

They also charged that “the delay has caused the applicant substantial prejudice”, warning that “if the hearing is permitted to proceed having regard to the prejudice and delay, there will be abuse of process and/or breach of the provisions of the Charter of Fundamental Rights and Freedoms.

“The substance of the allegations contained in the complaint is the same or similar to a previous complaint determined by the DC or ought to have properly formed part of the earlier complaint; the complaint is contrary to the principles of res judicata issue estoppels (a matter that has been adjudicated by a competent court and therefore may not be pursued further by the same parties);

“The Complaint is an abuse of process; the Complaint contravenes Section 16(9) of the Charter of Rights and that the Complainant not being a client is not entitled to bring a complaint,” Dalrymple’s lawyers claim.

The matter is being heard by the three-member panel of Gloria Langrin, Anna Gracie and chairman Richard Donaldson.

Questions emailed to Dalrymple Philibert and copied to her attorney, Queen’s Counsel Ransford Braham, on Wednesday night received no response.

Dalrymple Philibert was first elected to the Lower House in September 2007 as member of parliament for Trelawny Southern for the ruling Jamaica Labour Party and is currently serving her second stint as Speaker of the House.