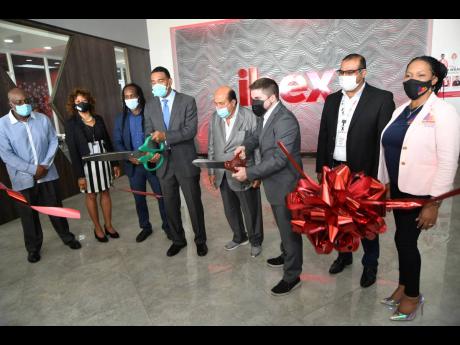 Prime Minister Andrew Holness on Thursday threw down a challenge to leading business processing outsource (BPO) entity IBEX to triple its Jamaican workforce, even as he defended his handling of the sector during the pandemic.

Holness, speaking at the official opening of Building One at the G-Tech Park in Portmore, called on IBEX Country Manager Jaime Vergara to double or triple their hiring of Jamaican workers.

IBEX is the leading employer of call centre workers in Jamaica.

Holness said, “IBEX has taken a special interest in Jamaica with the investments that have been made not just here in Portmore, but right across Jamaica, and we take note that the numbers under your (IBEX) employment are increasing, and we encourage you to hire more people.”

Construction for Building Two is under way and scheduled to be completed in early 2022.

Holness said that every groundbreaking marks another milestone in the realisation of Jamaica’s economic development potential.

Ground was broken for the Tewani Group-owned G-Tech Park in October 2019 and work began under the stewardship of Strength Construction Limited in December 2019.

“So it gives me even greater pleasure having broken ground a year or so ago, to now come to the grand opening and to declare open, officially, the first completed building,” Holness said.

The prime minister argued that the opening of G-Tech Park would help to bolster confidence in the economy.

“The BPO has seen tremendous growth locally and globally over the last years. It is among the few industries in Jamaica that have managed to grow in spite of the pandemic. As of June 30, 2021, the industry employed an estimated 44,000 persons compared to 38, 400 in June last year,” the prime minister said.

Holness said the industry was doing very well and defended his handling of the COVID measures.

He recalled that early after Jamaica recorded its first case of the virus, a cluster of COVID-19 cases emerged at a BPO facility. The prime minister noted that the Government faced pressure at the time to shut down the industry.

However, he said that the administration and the leadership of the industry agreed on a set of operating protocols, as well as a regulatory framework to facilitate work from home. “The BPO operating protocols served as the blueprint for the broader workplace protocols that were subsequently put in place,” Holness said.

Vergara said that while they have been growing in Jamaica, there are still plans to expand even further.

“With addition of the new G-Tech location we will be adding 1,500 jobs, close to 3,000 work-from-home jobs in the St Catherine and Portmore area alone. Our location in Jamaica doesn’t only include Portmore, it also includes Ocho Rios,” he added.

IBEX has been recognised as the top BPO workplace in the Caribbean, and Vergara said this will impact the Jamaican economy.

“In this last year of COVID alone we have invested over $14 million in capital expenditure because we believe in this market, we believe in our people, and this is the right place to be at the right time.”

Vergara heaped praises on Holness for believing in the BPO sector in the middle of the pandemic.

(“The Government) developed the necessary measures that allowed us to retain 4,000 jobs when we were at the worst in COVID and allowed us to add another 1,500 in the last six months,” Vergara said.

According to Vergara, IBEX will be spending more than US$15 million in its Jamaica payroll alone this calendar year, which will make it the largest private employer in Jamaica by the end of the year.

The Ministry of Economic Growth and Job Creation said the BPO sector brought $780 million into the economy last year.