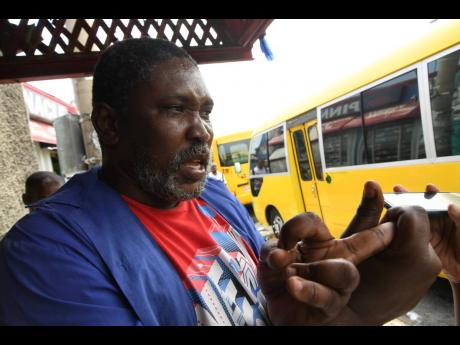 Rudolph Brown/Photographer
Damion, a bus operator, is concerned that revenues are being whittled away by the pandemic: “When yuh check that, nothing nuh lef. Wah di boss get? Weh me get as di driver? Weh di conductor get?” he questioned. 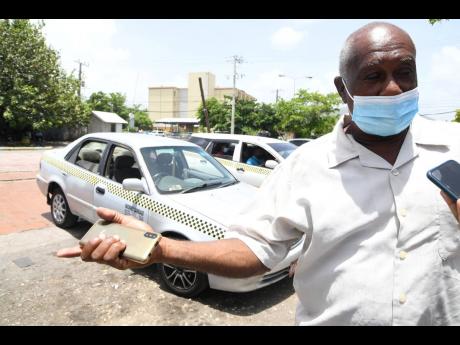 Rudolph Brown/Photographer
Taxi driver Paul Ramdass has put the blame for the uptick in COVID cases at the feet of undisciplined Jamaicans. “Any measures the prime minister takes, I will agree with him,” he said.
1
2

Optimism among public-transport operators for a summer bump in revenues is fast fading amid the imminent tightening of COVID-19 regulations that have left them reeling. More than a year of school closures and remote work has significantly reduced...

Optimism among public-transport operators for a summer bump in revenues is fast fading amid the imminent tightening of COVID-19 regulations that have left them reeling.

More than a year of school closures and remote work has significantly reduced ridership, but shorter curfews, the reopening of the entertainment sector, and the prospect of expanded face-to-face classes offered hope of a turnaround.

But operators in the major metropolitan hubs of Half-Way Tree and Cross Roads who were canvassed on Monday, ahead of Prime Minister Andrew Holness’ announced restrictions, were fearful of the toll they would face from lower passenger traffic.

Effective July 27, three hours will be lopped off curfews, with unauthorised persons expected to be off the streets by 8 p.m. Mondays to Saturdays and at 3 p.m. on Sundays.

A Portmore bus driver lamented that since curfews were first imposed in April last year, his expenses have consistently outweighed his income.

“Right ya now, all mi rent cyah pay. If this curfew hour tighten, it a go worse. Nuh money nah mek ova yah. Look pan di line a bus a wait fi load,” the driver, who gave his name only as Damion, bemoaned.

“When yuh check that, nothing nuh lef. Wah di boss get? Weh me get as di driver? Weh di conductor get?” he questioned, referencing the daily allocations for stakeholders, with the owner getting the lion’s share of revenues.

Another Portmore bus driver shared that since the 11 p.m. curfew took effect on July 1, he has seen a marginal increase in income.

“Last month, the curfew was 9 o’ clock, this month, it’s 11 o’clock, and I know that next month it will be earlier ‘cause the COVID numbers are going up,” said the busman, who requested that his name not be published.

The bus driver added that he could not afford to pay for at least 100 outstanding traffic tickets that were issued to him since the start of the COVID-19 pandemic in March 2020.

President of the All-Island United Route Taxi Association, Raymond Bynes, said the impact of the pandemic, as well as its attendant restrictions, has been devastating for his members.

He said they have had to make a number of adjustments, including carrying fewer passengers to comply with social-distancing measures laid out in the Disaster Risk Management Act.

“It’s either the curfew remains at 11 o’clock or they put a next hour on it. The hopes of the taxi operators were built up for the past few weeks when the 11 o’ clock curfew took effect, and we really don’t want it to go any lower,” Bynes said.

Shane, a taxi driver, told The Gleaner that an earlier curfew would not have an impact on him as he usually stops working by 5 p.m.

“I’m not making as much money like I did before COVID. I am still hoping that school will open come September,” said the driver, who has been plying a Kingston route since 2016.

Shane pointed out that he sometimes has challenges earning the daily target to pay the boss and has to work an extra day – his day off on Sunday – to make ends meet.

Trevor Bernard is also contracted by a vehicle owner to whom he hands over earnings daily. He is charged $6,000 per day and is often in arrears.

“Based on the amount of cars on the road, as a taxi man in this zone, the curfew hours don’t make a difference. I don’t see a surplus. I don’t see where I’m making more money than before,” he said.

Bernard’s three decades of experience and customer base have seen him receiving calls for charters across the island.

Those charters have allowed him to balance payments when business slows during the pandemic.

Paul Ramdass, a Cross Roads cabbie, said the indiscipline of the Jamaican people is to blame for the sharp increase in COVID-19 infections.

Ramdass is hopeful that schools will reopen for face-to-face classes in September although that likelihood is dim if transmission rates continue to rise.

“Any measures the prime minister takes, I will agree with him. I don’t work until late, so the curfew time doesn’t affect me,” said Ramdass.