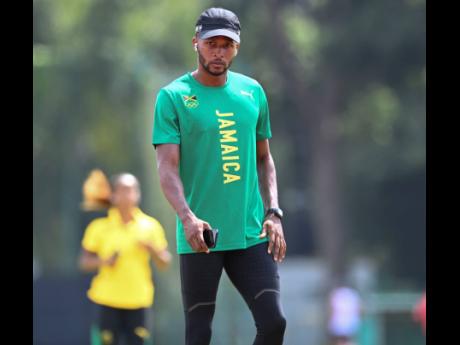 Gladstone Taylor/Multimedia Photo Editor
Jaheel Hyde, 400m hurdler, says he will man up to the moment in the Tokyo Olympics. 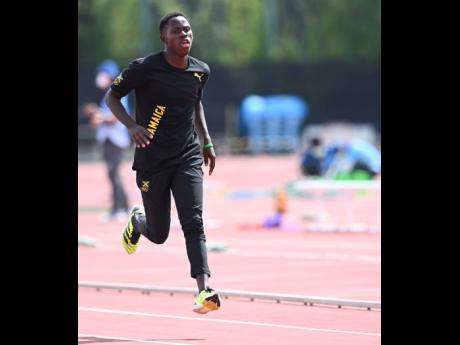 Gladstone Taylor/Multimedia Photo Editor
Young sprint dynamo Oblique Seville will take on the world in the 100m in Tokyo.
1
2

Jamaica’s men will be hoping to emulate their performance of five years ago at the Rio Olympic Games when sprint legend Usain Bolt, with two gold, helped to reel in five overall. Omar McLeod, the 110m hurdler, also won gold, while there was silver in both the 4x100m and 4x400m relays.

Today, The Gleaner projects the medal haul among the men in track and field.

Following his fourth-place finish at the Rio Olympics, Yohan Blake has the best chance of medalling here for Jamaica, being the only sub-10-second runner among the three nationals lining up. He ran a season-best 9.95 seconds in Atlanta at the America Track League.

However, his task will be very difficult as the United States, with world leader Trayvon Bromell (with a best of 9.77s), Ronnie Baker (9.84s), and Fred Kerley (9.86s), will be hoping for a clean sweep of the top three spots as the America eyes its first gold in the Olympic event since 2004 when Justin Gatlin won in Athens.

South Africa’s Akini Simbine, with a season and personal best of 9.84s, and Canada’s Andre De Grasse, who was third in Rio, could surprise here. However, Bromwell, eighth in Rio and who has recovered from an Achilles problem, is back in form and should go all the way.

Both Yohan Blake and national champion Rasheed Dwyer will have to produce their best if they are to be among the medals. Both are yet to break 20 seconds this season.

The US is very strong here. Like in the 100m, the US is set to win its first 200 metres gold since Athens 2004 when Shane Crawford stormed Athens. A sweep could be on the cards as Noah Lyles, with a season-best 19.74s, looks a cinch to win here, with good support coming from countrymen Kenneth Bednarek (19.78s) and 17-year-old Erriyon Knighton (19.89s). The experienced Andre De Grasse of Canada could spoil the American sweep, as he could improve big time on his season-best 19.89s.

American Randolph Ross is the only man to have gone below 44 seconds this season in the one-lap event after winning the NCAA Division One title for North Carolina A&T University in 43.85s. However, a long and hectic collegiate season could find him out of the medals here.

Bahamian Steven Gardiner showed good form leading up to the Olympics after defeating US champion Michael Norman in a Diamond Leage contest, but this time around the American looks set to turn the tables, while Michael Cherry, who was second at the USA Trials, could go all the way.

Former world record holder Wayde Van Neikirk (SB 44.56) of South Africa, coming off injury after a long lay-off, and Grenada’s Kirani James (PB 44.61s) should not be written off. However, Norman should have the edge.

It will be interesting to see if any of the Jamaicans – Nathon Allen, Demish Gaye, or Christopher Taylor – can make it into the finals despite not breaking the 45-second barrier this season.

World champion Grant Holloway of the US, after coming 100th of a second outside the world record to win at the USA National Championships in 12.81s, will start the favourite to win here. Second and third are wide open as Japan’s Shunsuke Izumiya (SB 13.06s) and Jamaican Ronald Levy (13.08s) will be hoping to claim the spots, but the experienced Orlando Ortega of Spain (SB 13.15s) and Sergey Shubenkov of the ANA are big-day performers and could be among the top three.

A world-record run is on the cards as Norway’s Karsten Warholm, who wrote his name in the record books with a 46.70s clocking on July 1 in Oslo, will be up against the US’s Rai Benjamin, who a few days earlier came so close to the world record after winning the national title at trials in 46.89s. Both are expected to have an epic battle.

Brazilian Alison Dos Santos (SB 47.34s) has been third best all season and will be hoping to hold on to the bronze medal but could find Kyron McMaster of the British Virgin Islands (SB 47.50s) in his way. Jamaica’s Jaheel Hyde (PB 48.18s) could dip under 48 seconds for the first time and should be among the finalists.

World silver medallist Fedrick Dacres will have his hands full as he is yet to hit top form this season after recovering from a hand surgery and will find it very difficult to be among the medals. Dacres will have to improve big time on his season best of 66.01m, as several of his main rivals have cleared 69m. Those contenders include Daniel Stahl of Sweden (SB 71.40m), Kristjan Ceh SB (70.36m) of Slovakia, and Stahl’s countryman Simon Pettersson (69.48m). Andrius Gudzius (SB 68.62m) of Lithuania cannot be written off.

Despite not finding his best form leading up to the Olympics, Jamaica’s Tajay Gayle, the world champion, will be hard to beat. Plagued by foul problems in most of his meets, Gayle, despite a season-best 8.29m, seems to have a big mark in the barrel and could be waiting for the Olympic Games to deliver.