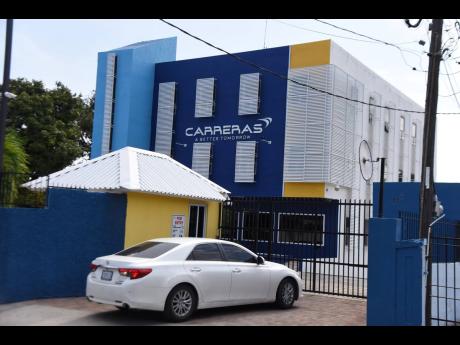 Kenyon Hemans/Photographer
The Carreras head office located at Ripon Road in St Andrew. The cigarette distributor said that proposed legislation would imperil the offer of scholarships to needy students.

Consultant psychiatrist and member of the Psychiatric Association of Jamaica, Dr Winston De La Haye, is endorsing a proposal in the Tobacco Control Act, 2020, which prohibits tobacco companies from awarding scholarships as part of their corporate social responsibility (CSR).

De La Haye wants funds set aside by tobacco companies for sponsorship or scholarships to be channelled directly to benefit individuals affected by the consumption of the product.

The Psychiatric Association of Jamaica is recommending that CSR funding from tobacco companies should be directed at rehabilitation and detox programmes, as well as the treatment of cancer and non-communicable diseases.

Chairman of the joint select committee reviewing the Tobacco Control Act, 2020, Dr Christopher Tufton, indicated that there has been significant public debate since it was reported that annual scholarships provided by Carreras Limited might soon be halted if the proposed legislation was passed in its current form.

In a recent presentation to the committee, managing director of Carreras, Raoul Glynn, said that as a “responsible corporate citizen”, his company had provided scholarships to Jamaicans over the past 60 years.

He said the company had awarded 125 tertiary scholarships valued at $30 million in the past three years.

However, Dr Saphire Longmore, president of the Psychiatric Association of Jamaica, told the committee that chairman of the Jamaica Coalition for Tobacco Control, Dr Aggrey Irons, has suggested that the money from tobacco companies for scholarships should be channelled through the Culture, Health, Arts, Sports and Education Fund.

Tufton told committee members on Tuesday that there was some sympathy for the tobacco company offering funding for education to those who could not afford it.

However, he argued that the source of funds that come from the sale of tobacco and the impact on the general population from its consumption were being ignored by some.

Glynn had appealed to the committee that his company wanted to continue its philanthropic initiatives but would not be able to do this, based on provisions in the proposed tobacco legislation.