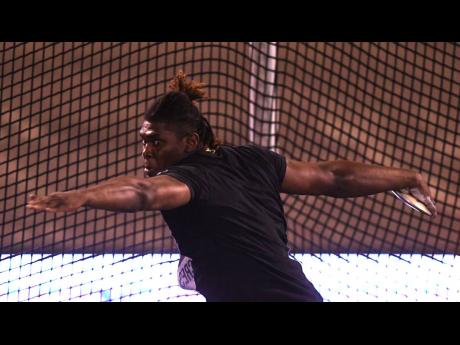 File
Discus thrower Fedrick Dacres has struggled this season but is hoping to pull out a championship performance at the Tokyo Olympics.

Five years ago, Fedrick Dacres opened Jamaica’s track and field campaign at the Olympic Games in Rio de Janeiro. He will play the same role today, but he is no longer a naive newcomer. Instead, Dacres is one of the finest discus throwers in the...

Five years ago, Fedrick Dacres opened Jamaica’s track and field campaign at the Olympic Games in Rio de Janeiro. He will play the same role today, but he is no longer a naive newcomer.

Instead, Dacres is one of the finest discus throwers in the world.

In Rio, a rain-slickened throwing circle and a hand injury doomed his effort.

Speaking just before he left for Tokyo, Dacres said he will rely on the experience he has accumulated since then to overcome the hand injury in his quest for glory.

“Five years ago, I was young and naive because as you know, I thought I could have done it based on raw power and all that. Now, it’s more technical and everything,” said the man who won the 2019 World Championships silver medal.

“I’m in better shape now, and I’m five years wiser, so there’s that.”

The only issue is his recovery from surgery. The malady has held him back in certain weightlifting exercises, but overall, he is in good shape.

“I’m not there yet in terms of strength. I’m close to my maxes other than the ones that need my hand mainly. I’m pretty close in terms of maxxing. So my body is okay. It’s just like the hand really giving me a warm time at this moment,” he said candidly.

Nevertheless, Dacres is trying to maintain a high level of confidence.

“I think that’s what I’ve been lacking all season. I haven’t gotten a good throw all season. So it plays on my mind, but it is what it is, and what I would say, ‘The championships are coming, so it makes no sense you dwell on that. You just have to make yourself better’,” he said.

The problem has held him to a season-best distance of 66.01m and uncharacteristically low finishes in the Oslo and Stockholm Diamond League meets on July 1 and 4, respectively.

Even so, Dacres, the first Jamaican to win titles at the World Under-18 and Under-20 levels and the first to reach a World Championships discus final, is eyeing success.

When he won the World Championships silver medal, he spun the disc 66.94m.

Dacres, Commonwealth and Pan-Am runner-up Traves Smikle, and Chad Wright will seek to advance from the discus qualification round starting at 7:45 p.m. (Jamaica time).

The 800m runner Natoya Goule, 400m hurdlers Jaheel Hyde, Shawn Rowe, and Kemar Mowatt, and the terrific 100m trio of Elaine Thompson Herah, Shelly-Ann Fraser-Pryce, and Shericka Jackson are also on the programme on the first day of athletics in Tokyo.