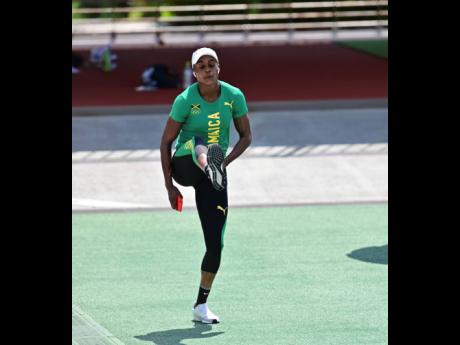 Gladstone Taylor/Multimedia Photo Editor
Jamaica’s Elaine Thompson-Herah goes through her paces during a training session at the Edogawa City Athletic Stadium in Tokyo, Japan, on Thursday. She is the defending champion in the 100m and 200m.

With track and field action now under way at the Tokyo Olympics, several local pundits are predicting a big medal haul for Jamaica’s athletes, with some hoping for an overall double-digit booty to rival the 11 garnered in Beijing in 2008 and Rio in 2016.

Following Diamond League and National Championships performances by the country’s three top female sprinters, Shelly-Ann Fraser-Pryce, Elaine Thompson-Herah, and Shericka Jackson, experts are salivating at the prospect of a sweep of all medals by the Jamaicans in the 100m and 200m.

The Gleaner takes a look at the medal chances of the Jamaican women.

The Beijing Olympics was historic as Fraser-Pryce captured gold while Sherone Simpson and Kerron Stewart shared the silver medal for a sweep by the Jamaicans.

The ‘Pocket Rocket’ will be hoping for her third Olympic 100m title to join the legendary Usain Bolt. But Thompson-Herah, the defending champion, will be hoping to claim her second title, while Jackson will be eyeing an upset.

While all three Jamaicans staking strong claims, it will not be an easy task. Great Britain’s Dina Asher Smith (SB 10.91s) and Cote d’Ivoire’s Marie-Josee Ta Lou (SB 10.86s) will be coming to crash the party despite running slower than the Jamaicans coming into the Games.

Fraser-Pryce, who was beaten by Thompson-Herah in her last Diamond League meet, looks set to return to winning ways, while Asher Smith, the World Championships silver medallist, is extremely dangerous and could pull off a major upset.

Undoubtedly, this is the most competitive event among the women, as any of six athletes have a real chance of winning here.

Defending champion Thompson-Herah (22.02s), the Bahamas’ Shaunae Miller Uibo (22.03s) and World champion Asher Smith (22.06s) are all gold medal contenders and could dominate here. Despite not looking her best in two Diamond League meets, the Bahamian, who is forgoing the one-lap event, should not be taken lightly .

Thomas, who slowed down some 10 metres before the finish line to look at the clock in winning at the US Trials, should have the edge. Expect a blanket finish also for the lesser medals among Asher Smith, Miller Uibo, and Jackson.

3. Shericka Jackson and Miller Uibo in a tie

Miller Uibo was seen as a cinch here to win the gold, but with her expected absence to concentrate on the 200m, the race is now wide open.

Jamaica’s Stephenie-Ann McPherson, many-time finalist at the World Championships and who won bronze in Moscow in 2013, is the leader here with 49.61 seconds. However, she will have to deal with the US duo of Quanera Hayes (49.78) and the veteran Allyson Felix (50.02).

Jamaica’s Candice McLeod (SB 49.91s) has an outside chance of medalling, but the occasion could be too big for her. The verdict should be gold for Hayes.

Jamaica’s Shanieka Ricketts, the World Championships silver medallist, should land silver and she will be aiming to surpass 15m for the first time to improve on her best of 14.98m.

Jamaica’s Kimberly Williams (SB 14.69m) should be in the finals.