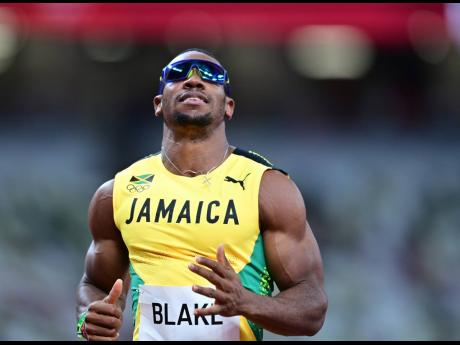 Limping and heavily bandaged, Yohan Blake’s painful walk away from the track after his disappointing semi-final finish in the men’s 100m at the Tokyo 2020 Olympic Games in many ways reflected the current condition of Jamaica’s male sprinting on the big stage.

Blake’s sixth-place finish in 10.14 seconds and the fourth-place effort of 20-year-old Olympic debutant Oblique Seville, who clocked 10.09 seconds, meant that for the first time in 21 years, there was no Jamaican in the men’s 100m final.

The gold medal was eventually won by Italian Marcell Jacobs, 9.80, ahead of American Fred Kerley, in a 9.84 personal best, and Canada’s Andre DeGrasse in a personal best of 9.89 seconds. Jacobs’ time was the fastest ever recorded by a European athlete.

“It’s definitely not the result that I was looking for or expecting,” Blake lamented. “It’s the first time in my career at this major level that I have not been able to qualify for a final.”

“My leg has been bothering me. I can’t push off it. I got to the middle of the race and I just kept on feeling a sharp stick, and I just couldn’t push at all,” Blake complained.

Quad and knee issues on his right leg have resulted in the 31-year-old pulling the plug on his participation for the remainder of the Games.

“I couldn’t push tonight, I tried with my leg and it just wasn’t happening. I don’t know. All of a sudden there was a niggle that came into play, but nevertheless I give God thanks. It could be worse. My thoughts are all over the place right now. I just don’t know.”

In truth, the writing was already on the wall the moment Bolt decided to hang up his size 13 Pumas.

Of Jamaica’s four medals in the men’s 100m since the 2008 Beijing Games, Bolt was responsible for three.

At the 2019 World Championships, Jamaica had already missed out on a medal in the men’s 100m final for the first time since 2003, this after winning nine of the 23 medals on offer from 2003 to 2017 and four of the eight gold medals handed out.

Incidentally, the only other Jamaican man to medal in the Olympic event since the 2008 Olympic Games is Blake, who, with a World Championships 100m gold medal in 2011 and double silver at the 2012 Olympic Games, plus the second fastest ever times in the 100m and 200m to his credit, has certainly played a massive role in Jamaica’s former dominance.

However, the gloss is gone, and Jamaicans’ once revered reputation, while being fiercely defended by the female sprinters, will require some work among the males as the rest of the world finally catches up to the sprint capital.

Bolt himself was less than optimistic heading into these Games.

“It’s really disappointing to see this. I felt that we had a good crop of athletes for the last Olympics, so it bothers me to know that this is where we are right now because most of the world is ahead of us. I’m disappointed. I think we do have the talent. It’s just for us to harvest it and for people to take the training seriously and get it done,” Bolt told The Gleaner a week before the start of the Tokyo 2020 Games.

Meanwhile, Blake said the focus has already turned to the World Championships in Oregon next year. The hope is that his and Jamaica’s fortunes will again head in the right direction.

“I’m disappointed. I am not going to lie. I train hard, and for this to happen at this moment, it’s crazy,” said Blake.

“I don’t think it will be difficult to lift myself up for the World Championships next year. I am a tough cookie. I just have to go back to the drawing board and get my leg sorted out,” said Blake, who by still competing after back-to-back career-threatening hamstring injuries, is himself a sprinting miracle.

“I’m grateful that I was able to come back from those injuries, and for me to come out here and get to this level, it has been fun, but this is not the result I wanted. The work will continue,” Blake said.

Perhaps Jamaica’s male athletes themselves will recover the lost sheen in time for the next major assignment.