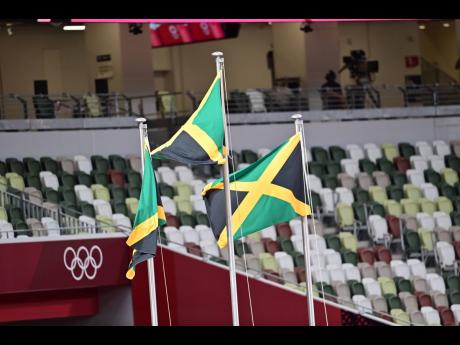 Gladstone Taylor
The Jamaican flags are hoisted during the medal ceremony for the women’s 100 metres event. 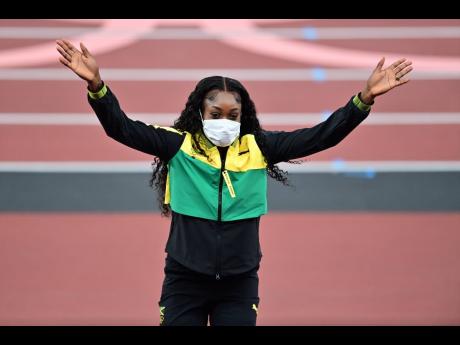 Gladstone Taylor
Centre: Jamaica’s Elaine Thompson-Herah on the podium at the Olympic Stadium in Toyko, Japan, on Sunday, August 1. Thompson-Herah led a 1-2-3 sweep in the women’s 100m final. 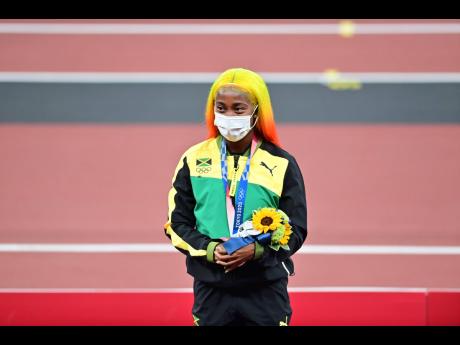 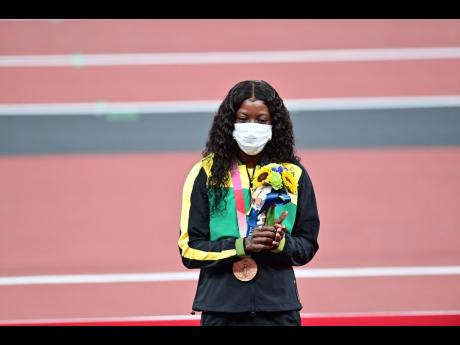 In the aftermath of Jamaica’s clean sweep of the medals in the women’s 100m final at the 2020 Tokyo Games, Legacy Athletics head coach Omar Hawes says that it may not be the last time that the Jamaican women achieve similar feats in the future.

It is the second time that Jamaica has claimed all the medals for the 100m women, matching their feat in Beijing 2008 when Fraser-Pryce won her first 100m Olympic title. Kerron Stewart and Sherone Simpson were tied for the silver medal. According to Hawes, the Jamaican women can replicate similar achievements in both the short and long term.

“It augurs well for how we position ourselves for the future. I don’t see why we can’t do it thrice or even four times, once we prepare ourselves for it. We just need to prepare ourselves as coaches, as administrators, as support (personnel), and as athletes generally to let it happen a third time,” Hawes told The Gleaner. “Once we get it right, then we are going to have persons who can replace and can also step up to the plate to strengthen the (pool) that is there.”

Hawes said that Thompson-Herah and Jackson will be a part of that future in the long term and should Fraser-Pryce decide on contesting next year’s World Championships, in the short term as well.

Olympian Bert Cameron, a 1983 world 400m champion as well as a member of the 4x400m relay team that got silver in the 1988 Games in Seoul, witnessed the 2008 sweep in person and said he felt the same sort of pride watching the women’s final as he did 13 years ago.

“They are all three determined young ladies and as an Olympian, I know how great that must feel. And I felt a lot of pride, a lot of joy, and I felt that I belonged because we are all Olympians,” Cameron said. “To me, it was like a family set-up. For a minute, the world just stopped and just watching these three young ladies just come through the finish line; it was awesome.”

“I know for the younger athletes coming up, this is going to mean a lot to them. They are going to realise that if these three ladies can do that, all of us can do that.”

Both Cameron and Hawes said that any of the three could have taken home the title, but Hawes said that while the order was a surprise, the end result was not in doubt, based on their form.

“It was something that I expected. I wasn’t surprised at the 1-2-3 and the execution because I saw it coming. In terms of the order, I know it would have been between Shelly or Elaine because of how they ran the last couple of races, and I knew that Shericka would have been a close third,” Hawes said.

Olympians Association of Jamaica President Marvin Anderson were among those who heralded the trio’s feat, saying that they played their part in a moment of history.

“This remarkable and historic achievement has warmed the hearts of Jamaicans home and abroad, and will no doubt prove to be a source of motivation for the entire team for the rest of the Games,” Anderson said. Sport Minister Olivia Grange also offered her congratulations, calling Thompson-Herah’s record-breaking title win “one of the greatest achievements in Jamaica’s sports history”.