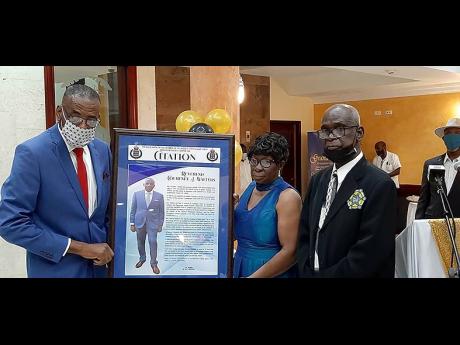 Contributed
From left: Reverend Courtney Walters, retired Chaplain of the Jamaica Constabulary Force for Area One receives a citation from Paulella Morris, and retired Superintendent of Police John Morris who now serves as first vice president of the Retired Police Officers Association, Area One Chapter. Occasion was a ceremony to honour Walters.

Reverend Courtney Walters, the recently retired chaplain for the Police Area One Division, has taken a parting shot at the Police High Command, saying the organisation is guilty of not treating new recruits and junior police officers well.

Walters is also calling on the Government to consider offering better wages and benefits for the crime-fighters, who are oftentimes called upon to work long hours under challenging conditions.

“Ladies and gentlemen, what is happening to our young men and women (in the police force) is a very serious matter. They need to be paid better, and they need to be respected more,” said Walters, who provided spiritual guidance and counselling to crime-fighters in western Jamaica for 23 years.

They need to be paid better by the Government and they need to be respected more by the High Command, because these are the people who get the job done,” added Walters, who was speaking at a ceremony put on by the Area One chapter of the Retired Police Officers Association in his honour.

According to Walters, neither the Jamaica Constabulary Force (JCF) nor the Government seems to be taking the contributions of the rank and file members of the force seriously.

Just last week, rank-and-file members of batch 115, who were temporarily transferred from several divisions to support anti-crime efforts in St James, claimed they were practically thrown out of the Teamwork Christian Centre, which served as their living quarters.

Subsequent to the complaint by the displaced policemen, the High Command denied their claim, saying they were asked to find private accommodation and were being paid a monthly housing allowance of $32,000.

However, one seasoned crime-fighter, who served as a district constable (DC) for almost 10 years before becoming a constable, told The Gleaner that his request to be sent back to his home parish was denied, leaving him stuck in St James.

“I am disappointed because I assured my family that I would be coming home in two weeks, and it is now almost three years,” the policeman told The Gleaner. “We know what we swore to, but as district constables, we would have established homes and have our families. So although I am getting more than when I was a DC, my expense has exceeded my salary.”

Cognisant of the challenges being faced by the new recruits and junior officers, Walters is calling on former members of the Retired Police Officers Association to become a support structure for these officers by serving as mentors to them.