Judgment may spell doom for cases 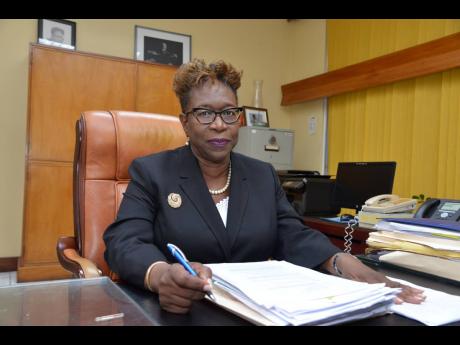 The years-long wait for transcripts and notes of evidence, a blot on Jamaica’s judicial system for decades, has been declared a constitutional breach in separate cases filed on behalf of two men who were convicted of serious crimes. A transcript is...

The years-long wait for transcripts and notes of evidence, a blot on Jamaica’s judicial system for decades, has been declared a constitutional breach in separate cases filed on behalf of two men who were convicted of serious crimes.

A transcript is the official record of the entire trial, while the notes of evidence capture the testimonies of witnesses.

The Court of Appeal, in the landmark ruling handed down last Friday, also quashed the sexual offences convictions of Evon Jack, one of the men, “as redress for those breaches of his constitutional rights”.

The panel of three judges affirmed the firearm-related conviction and sentences of the second man, Omar Anderson, but ordered his immediate release and opened the door for him to be compensated by the State for the breaches.

Anderson was set for early release in March last year, but was kept in custody because he challenged his conviction, according to his attorney, John Clarke.

Already, stakeholders in the justice sector have warned that the declarations could have implications for criminal convictions currently being challenged before the Court of Appeal, the State’s second-highest court.

Almost 400 appeals filed in the last four years challenging decisions of Jamaica’s high and parish courts have stalled because of the non-production of transcripts and notes of evidence, The Sunday Gleaner reported in March, citing statistics compiled by the Court Administration Division.

“It may mean that the public interest will suffer because cases that properly came through the system, … where courageous witnesses came and gave their evidence, may be quashed a few years later by the Court of Appeal through no fault of their own … that is the witnesses … and through the fault of the systemic errors,” said Paula Llewellyn, the state’s top prosecutor.

Clarke, who, along with attorney-at-law Terrence Williams, represented the two men, suggested, too, that attorneys and convicted persons “who have been waiting for far too long may want to petition the court to see if their case is deserving of a similar remedy”.

“I expect that to happen, but then I expect that our courts will sift through all the applications and make the appropriate remedies where necessary,” he said.

Llewellyn, the director of public prosecutions, believes the appeal court, through the declarations, was seeking to “turn up the heat” under the judicial system in relation to the production of transcripts.

“So, dare I say that the Court of Appeal, in seeking in the Evon Jack case to use what I refer to as the ‘nuclear option’ … is telegraphing what could be called a shot across the bow to the relevant authorities to get your act together in respect of dealing with the systemic issues that are preventing the timely production of the transcripts,” she said during an interview on Saturday.

“The Supreme Court is the court of record when you’re dealing with circuit court matters, and it is for the authorities over there to heed the warning of what is coming through in the declarations in this judgment.”

Justice Minister Delroy Chuck made it clear that his ministry has no responsibility for the operation of the court, including the production of transcripts.

“The most I can do, as the media does, is to highlight the inefficiencies and delays in the court’s output,” Chuck told The Gleaner on Saturday, while lauding the leadership of Chief Justice Bryan Sykes.

He said that since taking office, the Government has started to provide the resources needed to improve and upgrade the State’s ageing court facilities, as well as to secure funding to enable the judiciary to optimise its operations and outputs.

“MOJ can do so much, but the personnel in the justice system need to stop complaining and bring shortages to the attention of the chief justice’s or minister’s attention. There is no reason for matters to drag out in the courts for years, sometimes a decade,” he insisted.

The MOJ is the Ministry of Justice..

Jack and Anderson are among 30 convicts who have asserted, in separate lawsuits, that the years-long delays in obtaining transcripts and notes of evidence from their criminal trials violated Section 16 (7) of the Constitution, which stipulates that, within a reasonable time, they are entitled to a copy of any record of the proceedings made by or on behalf of the court. They also claim that Section 16 (8) of the Constitution guarantees them the right to have their case reviewed by a superior court within a reasonable time.

The lawsuits form part of an initiative spearheaded by the human-rights group Stand Up for Jamaica.

Jack has been awaiting the transcript of his criminal trial since May 2013, when he was convicted of buggery, carnal abuse, and indecent assault involving an 11-year-old girl.

The conviction was overturned by the Court of Appeal, which agreed that the non-production of the notes of evidence breached both constitutional provisions.

“Though the transcript of the summation of the learned trial judge was made available, the absence of the notes of evidence prevented the panel [of appeal court judges] from reviewing what evidence the jury considered in arriving at their verdict,” said a statement from the Office of the Director of Public Prosecutions, announcing the decision in Jack’s case.

“Therefore, the appellant could not have properly exercised his constitutional right to have his conviction reviewed by a court of higher jurisdiction.”

Anderson was convicted in July 2015 of illegal possession of firearm and robbery with aggravation and waited more than five years (October 2020) for his transcript.

His victims were robbed of nearly $400,000 in Delacree Park, St Andrew, after they responded to an advertisement about a car for sale.

Anderson was set for early release in March last year, but opted to remain behind bars rather abandon his appeal, his attorney said, pointing to the options he claimed were presented by prison authorities.

Further, the panel of three judges, which included the Court of Appeal president, Justice Patrick Brooks, suggested that Anderson should be compensated for the additional time spent in prison.

“It is declared that the right of the applicant [Anderson] to liberty under Section 14 (1)(d) of the Constitution of Jamaica was breached from the time he would have been entitled to early release in March 2020 and he is, therefore, entitled to compensation from the date of his application for bail on the 25th day of March 2021 to the date of this order 30th July 2021,” the court ruled.

Clarke made it clear that both men will seek compensation, but said that in Anderson’s case, he will seek to have the period for compensation pushed back to March 2020, when he was due for early release.

“We are firmly of the view that the declaration by the court are, by themselves, sufficient for the attorney general’s chambers to be written to by us and for them to be invited to make a reasonable offer to these gentlemen as it relates to compensation,” Clarke said.

For Williams, the issue is that delays in the production of transcripts mean that in many cases, convicted person remain behind bars even after their sentences are completed, triggering anxiety and other mental health issues.

“The State, by its neglect, must not cause him to serve any more than the lawful sentence,” he said, referring to the prospect of Anderson, a convicted criminal, being compensated by taxpayers.

“There must be no additional suffering with a sentence of the court,” said Williams, former commissioner of the police oversight body, the Independent Commission of Investigations.