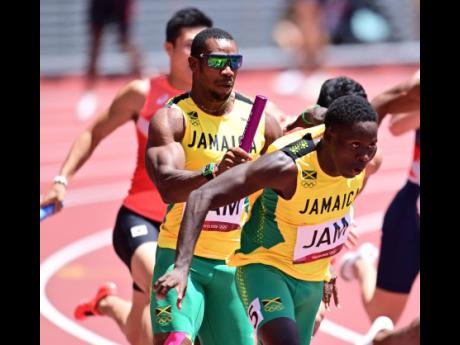 Gladstone Taylor/Multimedia Photo Editor
Jamaica’s Yohan Blake hands the baton to anchor-leg runner Oblique Seville in the heats of the 4x100m relays at the Tokyo 2020 Olympic Games on Thursday. Jamaica won the heat in 37.82 seconds.

Jamaica’s male and female sprint relay teams will be on the hunt for gold medals in their respective events at the Tokyo Olympic Stadium today as the Tokyo 2020 Games nears its end.

The women’s 4x100m team of Briana Williams, Natasha Morrison, Remona Burchell, and Shericka Jackson clocked 42.15 seconds to finish third in their heat, which was won by Great Britain in 41.55s, with the United States, 41.90s, finishing in second place.

With double Olympic sprint champion Elaine Thompson Herah and 100m silver medal winner Shelly-Ann Fraser-Pryce - the two fastest women alive - set to be brought in for the final, the Jamaicans will enter the track as overwhelming favourites to win their first gold medal in the event since the Athens 2004 Games.

The pair are expected to replace Morrison and Burchell for the final.

Jackson, who said she is looking forward to making up for her error in the women’s 200m heat, where she missed out on qualification after a misjudgement, warned the team not to get carried away with expectations and focus on the basics.

“The time will come. We don’t think about the time. We just think about how best we can execute and pass the stick around. We know that once we do that, everything else will take care of itself,” added Jackson.

At the Athens 2004 Olympics, the team of Tayna Lawrence, Sherone Simpson, Aleen Bailey, and Veronica Campbell-Brown clocked 41.73s to win gold in the event.

The Beijing 2008 superteam of Shelly-Ann Fraser-Pryce, Kerron Stewart, and Simpson, who had swept the medals in the 100m, as well as 200m champion Campbell-Brown, failed to finish the race after a mix-up on the second exchange between Stewart and Simpson, with every team since then finishing second to the United States at the Olympics.

The world and Olympic record in the event is 40.82s, which was set at the 2012 London Olympics by the United States.

The men’s team of Jhevaughn Minzie, Julian Forte, Yohan Blake, and Oblique Seville produced a mild surprise in their heat, winning comfortably in 37.82s ahead of Great Britain, 38.02s, and Japan, 38.16s, to advance to the final with the fastest time.

There was a major shock in the second heat, with the US failing to advance to the final, after finishing sixth.

“I think the execution wasn’t the best. It was our first time running together in competition and we didn’t have a lot of time to practise. I think we have very good chemistry, and I think we can get better in the final,” said Forte.

Minzie, who shared that he had been itching to get on the track, is also hoping that the team can tidy up its passing and make a push for a win in the final.

“I couldn’t sleep. I wanted to run from the moment I landed. I knew I just had to wait and come out here and do my best and help get us through to the final. So we are looking forward to the final, to making cleaner passes and carrying home the gold,” Minzie stated.

Jamaica has won gold in this event for the last two Olympics, but with Usain Bolt, Nesta Carter, and other stalwarts missing from the line-up, a win for this team would carry special sentiment, given the low expectations around the unit in the lead-up to the championships.