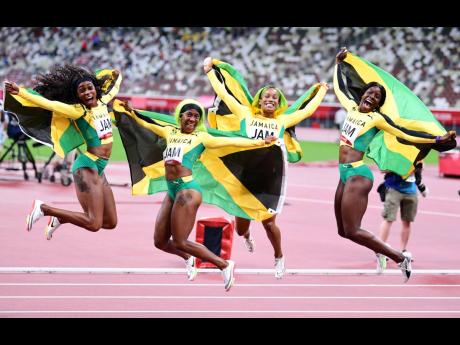 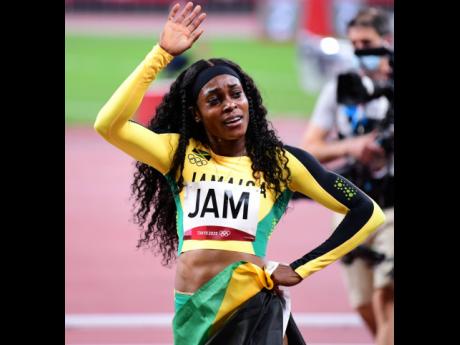 Gladstone Taylor
Elaine Thompson Herah waves to the crowd after Jamaica won gold in the women’s 4x100m at the Tokyo 2020 Olympics yesterday.
1
2

Jamaica will be looking to close out the Tokyo 2020 Olympic Games on a positive note after enjoying success in the women’s 4x100m relay inside the Tokyo Olympic Stadium as the island celebrated its Independence on Friday.

The team of Briana Williams, Elaine Thompson-Herah, Shelly-Ann Fraser-Pryce and Shericka Jackson delivered Jamaica’s first gold medal in the event since the Athens 2004 Games in a dominant 41.02 seconds win, the fastest time ever recorded by a Jamaican team.

It replaces the old national record of 41.07 seconds.

The result also meant that 100m and 200m champion Thompson-Herah became the first Jamaican woman to win three gold medals at a single Olympic Games, a feat that was celebrated by Fraser-Pryce and the other members of the team.

“As the senior athlete, I was just ready for the opportunity to make sure we carry the stick around and we got the national record. I mean we wanted a world record, also for us, we wanted Elaine (Thompson-Herah) to get the three gold medals because the last Olympics she missed it and now she has it, so we could not have asked for anything more. We are very grateful for the effort,” said Fraser-Pryce, who was picking up her eighth medal at the Olympic Games, joining Veronica Campbell-Brown as the third most successful female athlete in Olympics history in terms of the number of medals won.

Allyson Felix currently has 10 medals ahead of the women’s 4x400m relay, while Merlene Ottey retired with nine to her name.

Thompson-Herah, who was involved in a less-than-convincing opening exchange with Williams, was thrilled with the three gold championships and said that while the team was hoping to secure the 40.82 seconds world record, which is owned by the United States, they were happy for the win, the national mark and the Independence Day gift to Jamaica.

“This is surreal, but I think after the championship is over, then maybe I will really realise what I have done but I have to give God thanks and to these three ladies for giving me this third gold medal,” said Thompson-Herah.

“It wasn’t perfect but we managed to get the stick around, we didn’t get the world record but we got a national record on Independence Day, what more could we ask for?”

Williams, competing in her first Olympic Games, is seen as the future of Jamaica’s female sprints. She responded with fearlessness and ferocity to her introduction, eating up the stagger on her first-leg rivals to get the Jamaicans going.

“I just wanted to get out quickly, do my best, execute properly and get the stick around to Elaine. I was really excited, more than nervous and I was just looking forward to add another gold medal to the collection,” said Williams, now fully initiated sporting a Fraser-Pryce and Thompson Herah-esque bright-coloured wig.

For Jackson, the sprint relay gold medal was welcome redemption for a missed opportunity in the 200m, when she failed to advance from the heat after an error in judgement.

“I’m just really grateful, we all went out there to do our best, we got a national record, we won a gold medal so it’s just a great feeling to go out there and execute,” said Jackson.

The gold medal did not arrive without anxiety and a few issues for the ladies.

“We were ready, we came out here, and to be honest, I’m telling you, especially with relays, you have to make sure you are confident and you aren’t nervous because it’s a baton and anything can happen,” said Fraser-Pryce.

Jackson shared that there were exchange issues during the warm-up, which played on her mind as she made her move ahead of the final exchange with Fraser-Pryce.

“I was really watching the marker, I didn’t want to move too soon. When we were around the back, I couldn’t get the pass, so I wanted to wait until she hit the marker to get going. I didn’t want to run leave the baton. I really wanted us to break the world record, but it didn’t happen. We got the national record, so it’s a great feeling,” said Jackson.

The team will be looking to add to its eight medals (4 gold, 1 silver, 3 bronze) on today’s penultimate day of the Games with the women’s and men’s 4x400m relay finals taking place.