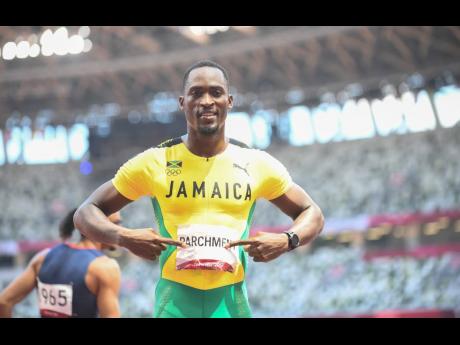 WESTERN BUREAU:
The Good Samaritan who gave taxi fare to Olympic gold medallist Hansle Parchment in Japan, allowing him to secure his place in history, is being invited to Jamaica by the Government.

The woman who literally saved Parchment from missing the 110 metres hurdles, when he accidentally boarded a bus to the aquatic venue instead of the track and field stadium, is now being tracked by the Ministry of Tourism, Minister Edmund Bartlett told The Sunday Gleaner yesterday.

Known only as Tiana, Parchment, who dedicated a three-minute and 27-second video saluting her for her kindness, said, had it not been for her selflessness, he probably would not have run in the historic race which also saw his countryman Ronald Levy medalling.

Parchment said, when he realised he was on the wrong bus, and tried to get assistance from the official cars at the Olympic event, they were all already booked, and his only other option was to return to the village and take another bus, which would cause him not to even be able to warm up for the run.

“I saw this volunteer and I had to beg, ‘cause of course she is not allowed to do much, and she actually gave me some money to take one of the taxis. And that’s how I was able to get to the warm-up in time, and had enough time to compete,” said the Olympian, who described the incident as awesome.

Parchment not only thanked the Good Samaritan publicly, but he paid back the money she gave him and gifted her a Jamaican shirt.

After viewing the video yesterday, the tourism minister said he was compelled by the fact the lady went beyond the call of duty to achieve great results.

“It is selfless what she did; one would not know what the outcome would have been,” he stated.

Bartlett said he was moved to invite the lady to Jamaica, where she will be hosted by his ministry team.

“No matter where in the world she is, we want to reciprocate the kindness shown to one of our own,” he said.